The 6th Southern Comfort Classic regatta kicked off Friday night with ASC members Lenny Wells and Teri Fosmire sharing some alone time at the local pizza joint.  We are still investigating the lack of enthusiasm for the annual darts and beer extravaganza, but preliminary indications point towards the absence of Dave “Plywood” Michos and Brent “It’s only a 5 hour drive to NC” Barbehenn as primary factors.

The weather forecast was very promising for the entire weekend and did not disappoint.  ASC suited up five boats for the event, including one helmed by Nicky Einthoven with crew Teri Fosmire, still glowing from her date with Lenny the previous evening.  Lenny was joined by his rising junior star, Caswell Kern, while new Jet member Curtis Boyd was ready to give #203 its first action of the year.  Joining the ASC boats was our regular traveler, Tom Grace and Paula Pacheco (Lake Norman YC) in Wren, last renovated during the Eisenhower administration.

A new innovation at Lake Julian this year were real-time wind observations, and they showed sustained winds at 14 kt with a gust recorded at 24 kt while the fleet readied for the first start.  Nicky correctly determined that her crew weight of 60 lbs. combined was a little light for the conditions and opted for race committee duty, leaving five boats in the fleet.  PRO Connie Berchem set up a nice square course along the long axis of the lake.  Hennon’s crew Lacie Wallace called the line perfectly and #483 raced off into the lead with Wells/Kern close behind.  Boyd and crew Mitchell caught a big 20 kt puff halfway up the second leg and experienced firsthand the warm embrace of a power plant cooling lake.  Hennon/Wallace would take round 1. 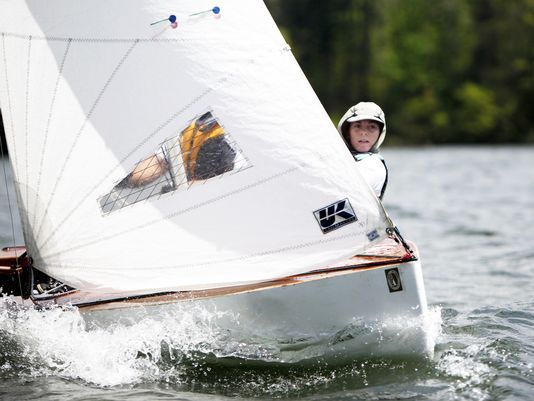 Race 2 would ultimately decide the regatta winner.  Apparently, Grace and Pacheco did not take it too well as Hennon and Wallace performed some “victory spins” around #717 prior to the start.  Their chants of “We are the Champions” probably didn’t help matters either.  So, as #483 rounded the top mark for the second time, #717 gybed just in front and Tom “accidently” lost control of the tiller, rounding up into #483’s kitchen and causing an emergency gybe and capsize to avoid Paula being on the business end of a boom.  Hennon/Wallace ultimately could not recover and had to retire for the day.  Wells/Kern went on to take the next two races and secure the lead.

That night, the fleet enjoyed a wonderful evening at the local restaurant on the lake.  They were joined by several ASC club members for a BBQ meal.  Bruce and Jo Sampson (#977) provided the entertainment with some wild cornhole tosses and Teri showed everyone that she’s a secret Jenga master.  Later in the evening, Teri and Lenny were seen sharing a drink under the dim moonlight as the warm sounds of Kenny G played from the bar.  Not sure what that was about.

Sunday featured great wind, the return of #483, the debut of Nicky and Teri, and capsizes number 4 and 5 for Team Boyd/Mitchell.  I can’t say enough what a great attitude the crew of #203 displayed the entire weekend as they just would not quit.  It paid off handsomely in the second race of the day as they led the race halfway through.  Einthoven/Fosmire sailed consistently fast all morning and finished just behind the leaders in all four races.  As for the leaders, Wells/Kern and Hennon/Wallace battled all morning, engaging in tacking duals and looking for every small advantage to nudge ahead.  It was great racing and a reminder how fun this boat and class can be.

“Dave’s Dogs” hot dog cart filled everyone’s stomach for the award ceremony, which featured homemade sailing bags by Berchem’s Blue Ridge Sailmakers- what a special treat.  A big thanks to all of the ASC volunteers who made this event possible.  We’ll do it again next year!