In the fall of 1952, racing skippers on Barnegat Bay, New Jersey were discussing the merits of the various existing one-design racing classes. They did this quite often, and there was a substantial amount of dissatisfaction with the classes which were in common use. They were either too big or too small, too tricky or too slow and most of them were too expensive or not strict enough one-designs.

These skippers, as all groups of racing skippers, did not agree entirely on what the ideal boat should consist of. They did, however, agree on many fundamental desirable features. They wanted the following: 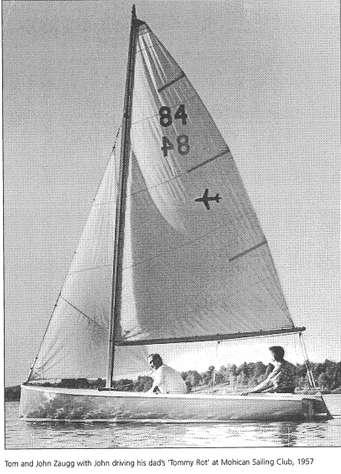 Howard V. Siddons, well known Barnegat Bay skipper and boat builder, decided to try to meet their specifications. He did this very successfully in the ingenious combination of the sail plan from the very popular Snipe and the hull lines of the Uffa Fox International-14 Alarm (dating back to 1935). This narrow transom, deep rocker design won three Prince of Wales Cup races. Until Uffa's time there were dinghies that planed on occasion, but there were no true planing dinghies. This design dominated the International-14 Class until 1950. It was from one of these craft that the mold for the first Jet-14 was taken. The hull was readily available in this country and provided a light weight planing design along with the low maintenance found in other classes. The combination of the two basic elements (hull & rig) worked exceptionally well, and Siddons, along with Harry Sindle, created a boat that was well-balanced in appearance and sailing qualities.

In designing the first of these boats, Siddons went to extremes in order to keep the boat simple, inexpensive and easy to build. He decked the boat over for appearance, comfort and safety, although she was generally dry enough not to need decking to shed water. The spars were kept solid, and equipped with sail track for the benefit of the amateur builders. A metal plate centerboard was decided upon, which eliminated expensive lead castings and troublesome centerboard gaskets. Plans, patterns and instructions were furnished for the do-it-yourself sailors, with the majority of the elements coming from stock size lumber.

Initially, there was no thought of using this boat for juniors. The design was thought "too hot" and not safe enough. But the youngsters themselves didn't believe that. They took such a shine to the design that about 60% of all Barnegat Bay Jets were skippered by sailors under 18. The reasons that they were able to get away with it, even on blustery days, are these:

These features also make the Jet-14 attractive to another group, the husband and wife team. They can handle this boat successfully with a minimum of physical exertion and a maximum of racing enjoyment. There is no need for a crew like a "gorilla," as in some of the large two-man boats.

The Class Association was started April 17th, 1955 to run the class business, organize the racing and protect the one-design features of the boat. In 1956, the boat specifications were established. Dues were set up and measurement certificates were prepared and distributed. Copies of the Constitution and By-laws were printed. The class newsletter, "Jet Blasts," was first published and a regatta schedule was drawn up.  In September of 1957, the Jet-14 trademark was registered.

In 1960, the Dubdan fiberglass Jet was entered in competition.  By 1961 there were about 35 glass Jets - some were Dubdam (built in the Netherlands) hulls, others were constructed in the USA by Mobjack for Siddons and Sindle.  Interest in aluminum spars surfaced by 1962 although Jets featuring traditional spruce spars still competed in regattas into the 21st century.  As the class continued to grow and multiple boat builders came on the scene, a more formal method of issuing boat numbers was instituted and stricter measurement procedures were enforced.  Increasing numbers of Jet fleets and greater travelling distances led to the introduction of a proxy voting method at the class annual meeting.

By 1962, over 600 boats were registered with the class association spread across 33 chartered fleets.  Much of the expansion is attributed to a national advertising campaign undertaken by Siddons and Sindle in 1963.  This directly led to the establishment of fleets at the University of Michigan, The Citadel, Ohio State University and other colleges.  Other notable fleets established at this time included Saratoga Lake in 1960 (Fleet 31, active for over 50 years), Packanack Lake in 1962 (Fleet 35, still active today) and West River Sailing Club (Fleet 46), which hosted the Jet-14 nationals six times (1968, 1973, 1978, 1984, 1991, 2003).

By the 10th anniversary of the class in 1965, there were 888 registered boats in 37 fleets and 369 paid members.  Class president Joe Willis noted the introduction of self-rescue Jets on the scene around this time, commenting that "although they did not go any faster, their obvious advantage after capsizing was well-demonstrated".  The inpetus for self-rescue Jets can be traced to a visit by Bob Smith from the  magazine One-Design (now known as Sailing World).  Bob visitied one of the NJ fleets and witnessed a particularly difficult capsize recovery.  At his suggestion, Siddons and Sindle presented Jet #806 as one of the first "tanked" boats.

As the class continued to grow at the end of the decade, significant changes were on the horizon.

After numerous experiments with employing spinnakers at various fleets, the measurement committee was tasked with drawing up a set of specifications for the adoption of the third sail.  They settled on a design for the 1971 Nationals that is still in use to this day.  Other approved changes included a mid-boom traveller and furling gear for the jib.  By 1977, sail numbers were required on both sides of the spinnaker and any type of spreader could be used.

This decade was a boom for Jet-14 competition and numbers.  The 1975 Nationals at Hunterdon Sailing Club (NJ) is a fine example.  The Junior event boasted 28 boats from 8 fleets and was won by Jimmy McCrea and Richard Waggoner (#355).  The senior event, which was now contested during the same week as the juniors, saw 59 boats compete for the crown.  Gary Smith (#530) overtook Brent Barbehenn (#558) in the final race to win the national championship.  Barbehenn would later win plenty of championships of his own and still races #558 today.

1980 marked the 25th anniversary of the class.  Participants at the Nationals at Hunterdon that year were given commemorative glasses to celebrate.  A 3-page feature article in Yacht Racing/Cruising magazine by four-time National Champion Jamie Brickell sparked new enthusiasm for the boat.  The 1985 Nationals returned to New Jersey (Toms River Yacht Club) for the 30th anniversary event.  Matco Boats in Palmyra NJ became the primary builder of boats for the class.

By the end of the decade, further efforts were made to make the Jet more affordable and accessible.  Chief Measurer Randy Bruns constructed a new deck mold to make the construction of fiberglass boats less costly.

Unfortunately, the 1980s was an era of decreasing participation in Jet racing.  After 47 boats raced in the 1976 Nationals at Mohican Sailing Club, the club  became inactive only two years later.  Some Jet sailors left to class to succeed at the national level.  Bob Held won US Sailing's Sears Cup and Heidi Backus Riddle the Adams Cup and 1985 Rolex Yachtswoman of the Year Award.  Junior Nationals participation declined to a point where no event was held for six consecutive years in the mid-late 1980s.

Jet racing in the Midwest was resurrected when Michael Parramore established a new fleet near Chicago at Illiana, Illinois.  Michael "tenaciously" encouraged Marion Zaugg at Mohican to reactivate Fleet 4, which he did with great success.  Mohican went from inactive to 19 active boats in 10 years.

The renewed activity in the Midwest brought a new influx of junior sailors into the class and led to the first Junior Nationals in six years.  The 40th anniversary of the building of the first Jet-14 by Siddons in Island Heights, NJ was 1992.  The Nationals that year returned home to Island Heights Yacht Club to mark the occasion.  David Siddons, Howard's son and mayor of Island Heights participated and Mrs. Howard Siddons was present at the annual awards ceremony and dinner.  To encourage new sailors and increase participation at Nationals, a "B fleet" category was introduced which was open to any skippers without chevrons.  A special junior level class membership was also made available at this time.

By 1994, Mueller Marine in Lorain, OH began building Jet-14s, offering bare hulls to fully-rigged and race-ready Jets.  The first Mueller hull (#1131) were shown at SailEXPO '95 in Atlantic City, NJ - they earned the reputation of being the stiffest, fastest glass Jets constructed yet.  A rountable discussion at SailEXPO '96 called "Winning in Jet-14s" that touched on boat preparation, sail trim, tuning and tactics was a huge success and videotaped for future generations.  Membership and participation once again was on the rise.  The class held a Midwinters regatta for the first time in 28 years at Sailfest '96 in Sanford, FL.

Momentum continued in the latter part of the decade.  A non-spinnaker "C Fleet" was introduced for the first time at the 1999 Nationals.  The November 1999 issue of Sailing World included a four-page feature about Jet-14s, the Jet-14 class, and the 1999 Nationals.  The Jet-14 website was created to engender fast communication and promote the class.

A high point of the decade was the Journalists Challenge Regatta, held at Severn Sailing Association in Annapolis, MD.  The first place trophy was "Ink Jet", a completely refurbished and refetted Jet-14 (#823).  Nine influential sailing writers competed, including Angus Phillips, Chris Pastore, and Chris Munsey.  The boat was won by Dr. Stuart Walker and crew Todd Walker (sailing #1140), who took three bullets out of six races. 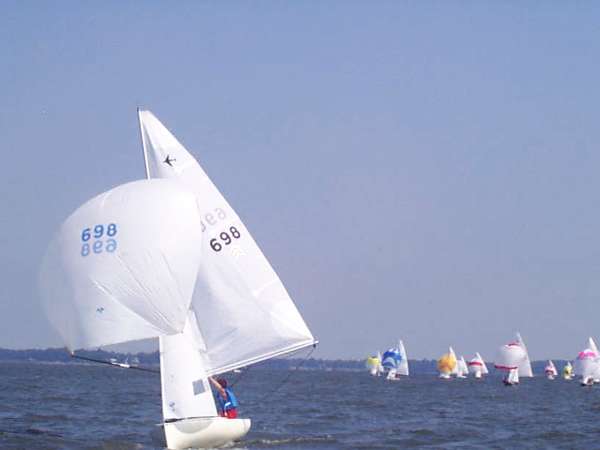 The journalist challenge and heightened interest at SSA led to a new fleet charter for the club in 2000.  A new charter was also awarded to Annapolis Yacht Club across the river.  SSA became the nexus of Jet sailing throughout the decade in mid-Atlantic, hosting Nationals in 2000, frostbite racing each winter, and a large travelling contingent that supported regattas at other clubs.  In 2002, Nationals returned to Island Heights to mark the 50th anniversary of the construction of the first Jet-14.  40 boats participated, with Brent Barbehenn running away with the title over SSA Fleet Captain Dirk Schwenk.  Barbehenn (shown at left dominating the 2000 Nationals at Severn Sailing Association) was virtually unbeatable throughout the decade, winning 12 straight National Championships from 2002-2013 as part of his 19 titles, many by significant margins.  Brent is also a Thistle National Champion and has finished in the top 5 of US Sailing's Championship of Champions regatta.

In 2003, a Traveler's Series was established to encourage participation at out of town regattas.  Doug Brown and Susan Mallows (Hunterdon) won the first TS award, which accounted for results from the Spring Thaw (Lake Norman YC), Cleveland Race Week, Nationals, and Sail Newport.

There were many changes in fleets during the decade.  The West River Sailing Club fleet disbanded as several members moved to SSA or left the class in 2007.  At the same time, Jet sailing expanded in Ohio, with a new fleet charter awarded to Hoover SC near Columbus, OH.  One of the oldest fleets at Saratoga, NY also folded during this time but was picked up by a new fleet at Mayfield Yacht Club, who would host the 2009 Nationals.

Allen Boat Company became the official builder of Jet-14s in 2007 and continues to build fast, high-quality Jets to this day.

After 65 years, the Jet-14 class continues to race at venues across the southeast, mid-Atlantic, and midwest U.S.  New fleets at Edgewater Yacht Club in Cleveland and  a Carolina fleet (#65) based in Asheville NC has consolidated long-standing Jet racing in those areas.  Brent Barbehenn notched his 22nd National Championship at Lake Norman Yacht Club in August, 2018.