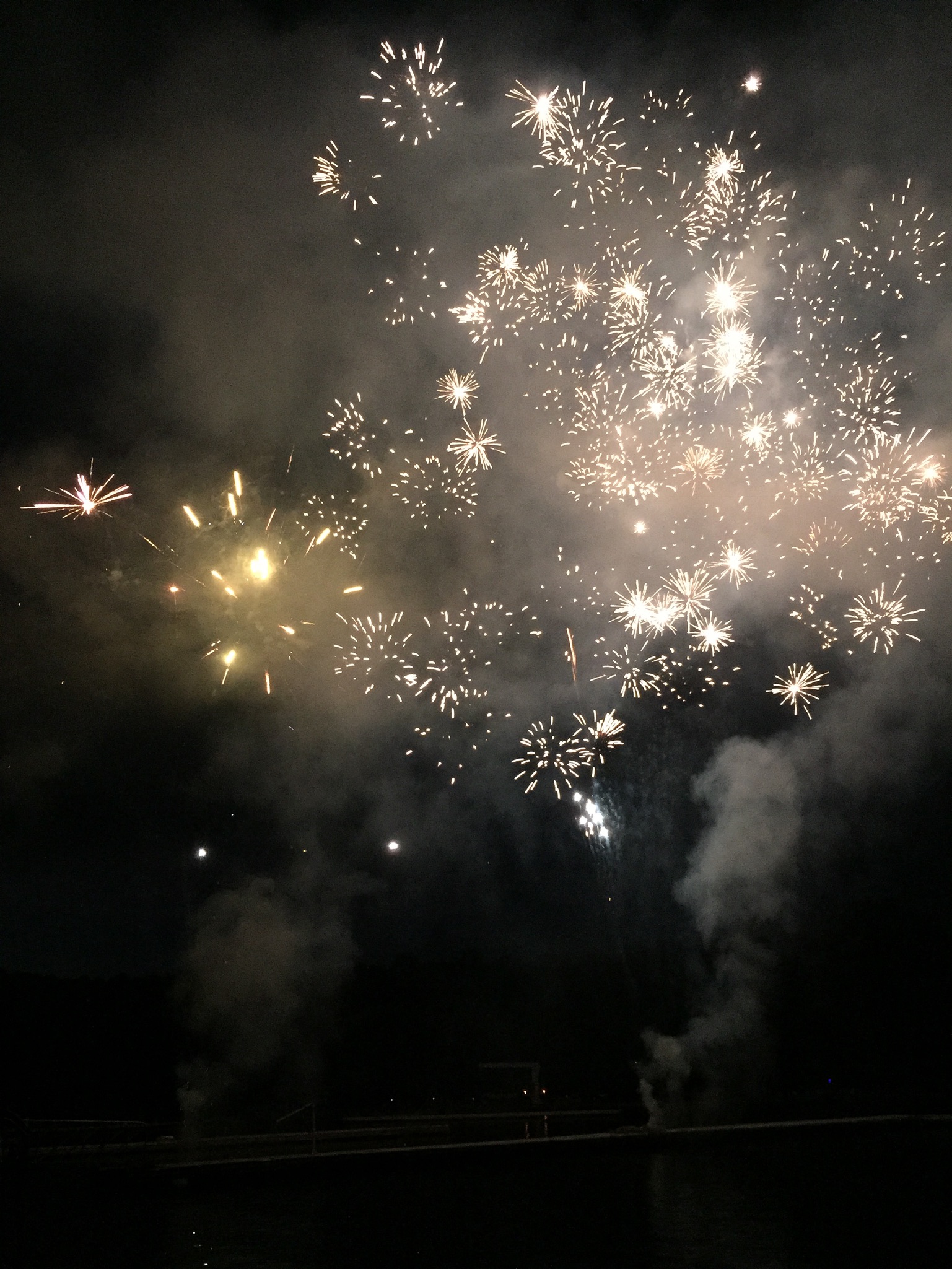 Well, you never know what you are going to get for a July 4th Regatta on Lake Norman. We had five Jets signed up with four sailing; the Team Michos were not able to make it due to an unforeseen commitment (work or something like that). The forecast was for 4-8 knots on Saturday and a little less Sunday. We didn’t get quite that on Saturday. No races were sailed on Saturday and they refused to open the beer until later in the afternoon. We were treated to a wonderful cardboard boat race. Having never experiences this before I thought all the boats would sink, but teams came up with some very good ideas and most of the seven boats were able to complete the four-leg course. Teams were able to use cardboard, cardboard tubes, half tubes, and duct tape. One boat seemed to commandeer some of the other team’s tape as their entire boat was covered in tape. It served to keep it floating extremely well and they won the cardboard regatta by a large margin. I think Caswell from Team Second Wind can tell the whole story and might have even been on the winning team.

The focus of the LNYC July 4th Regatta has always been the party, and it did not disappoint this year. The experience included much eating, drinking, and dancing. Some might say it culminated with the fireworks, but the party went on for hours afterward. It seemed that most people had looked at the forecast and decided they weren’t going to sail on Sunday anyway.

As it turned out Sunday brought enough breeze to get three races in. The race committee worked hard to keep the boats moving. Lucas Porter had never flown a spinnaker before, so team Porter was trying to get a little practice in before the races. The douse took a little longer than expected and they sailed quite a way downwind of the start line. So much so that the pin boat came down to check on them. They did however make it back up to the starting area before their start, and as the horn blew for the first starting sequence they noticed that neither had a watch, so they went to manual mode for the starts (counting down the last 60 seconds in their heads). Lenny was able to get a good start and looked to be in position to control the fleet. Team Porter saw some breeze on the right and tacked away to chase it. Tom (as is common) banged the right corner and managed to get around Lenny. The Wallace’s still learning the boat stayed in the middle and found less breeze. Porter led around the first mark. The crew work of Tom and Paula really showed as they were able to close the distance quite a bit. In the end, the Porter’s were able to hold off Tom and Paula for the win.

The Wallace’s seemed to take a page from Porter’s book by sailing way downwind from the line. They made it back up a little late but started close to the other boats. Wells, Grace, and Porter were all on the line and each had a nice little lane. This time the left had the breeze. Lenny made the mistake of chasing something off on the right where Grace and Porter went left. Porter rounded the windward mark just ahead of Tom. Again, the great crew work on Wren proved to be a big advantage. They got their sail up and were able to roll the Porter’s. Once 645 got their spin up they were able to return the favor. With the Porter’s leading with less than 10 boat lengths to go the two boats sailed into a cluster of Thistles, U20s, and what seemed to be a swarm of boats. Wren to leeward was able to find their own wind and squeezed out in front for the win, followed by 645, 1130, and 962. 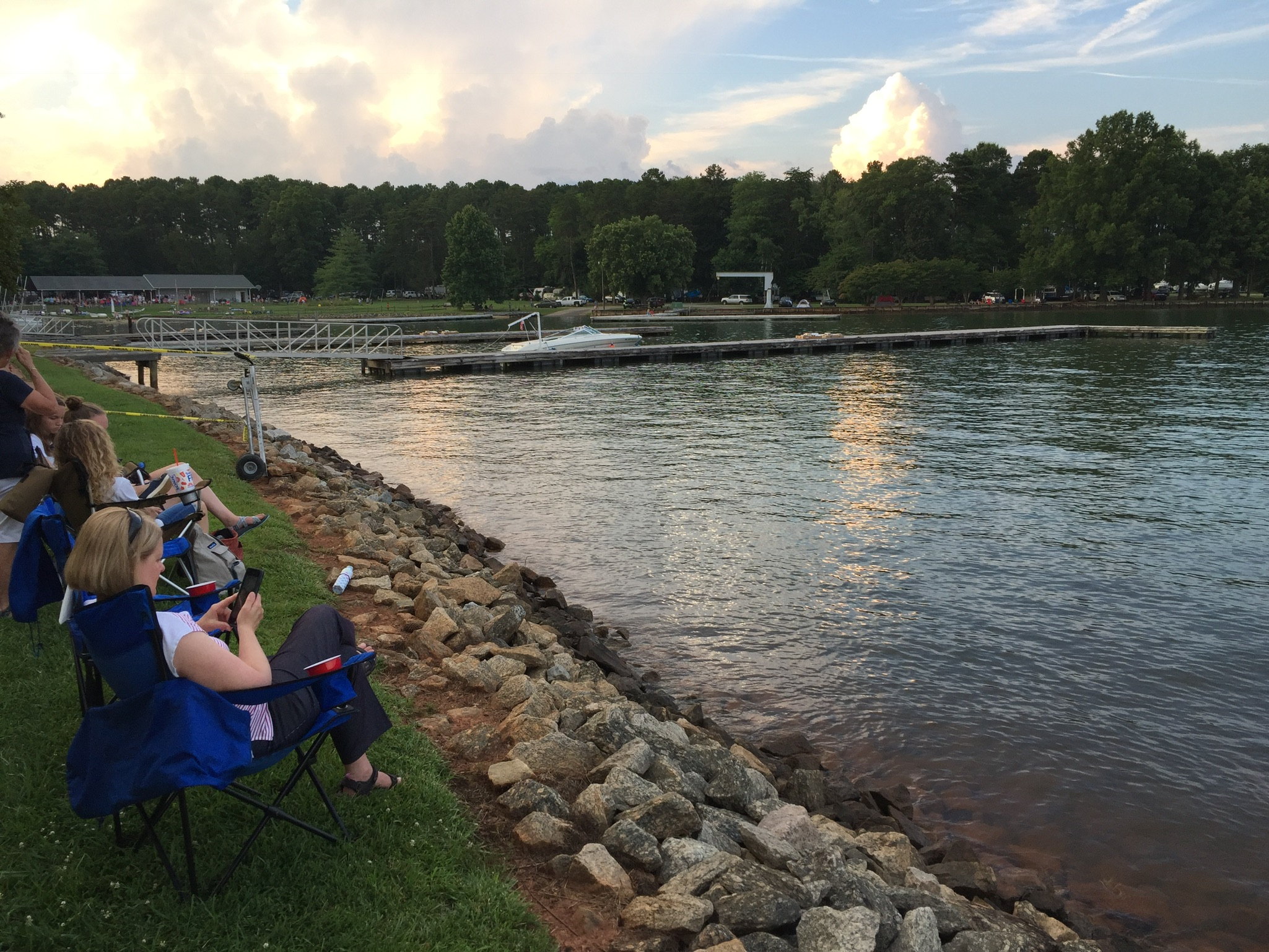 In the final race of the day it was winner take all for Porter and Grace/Pacheco. The wind had shifted, and you could barely lay the line on port, so everyone wanted to be at the boat end of the line. Lenny took himself out of the race by being over early. Stuart and Lacie were just a little behind and too far to leeward, which made it a match race for Porter and Grace/Pacheco. The breeze was lighter, and the first leg was about 80% on starboard tack. Porter was again able to round the windward mark just a little ahead of Wren. The inexperience with spinnakers bit 645 again as it took them almost half the leg to get their spinnaker pole up. This allowed Wren to get in front and never look back. They held on for the race and regatta win.