A promising weather forecast attracted five Jets for another year of excellent racing on the Kerr Lake resevoir near Henderson, NC.  Expert Jet organizer Barry Saunders decided to try something a little different with the group camping options this year, reserving a more private locale a few minutes from the state campground.  Advantages: alchohol could be consumed without risk of arrest, no infiltrations of Thistle or Buccaneer sailors, plenty of space for tent pitching, private bathrooms.  Disadvantages: party boats parking offshore blasting Barry Manilow until 2 a.m., no showers, $7 a pop to get into the state park.  All things considered, the group determined that the move was a positive and are looking forward to the new accommodations going forward. 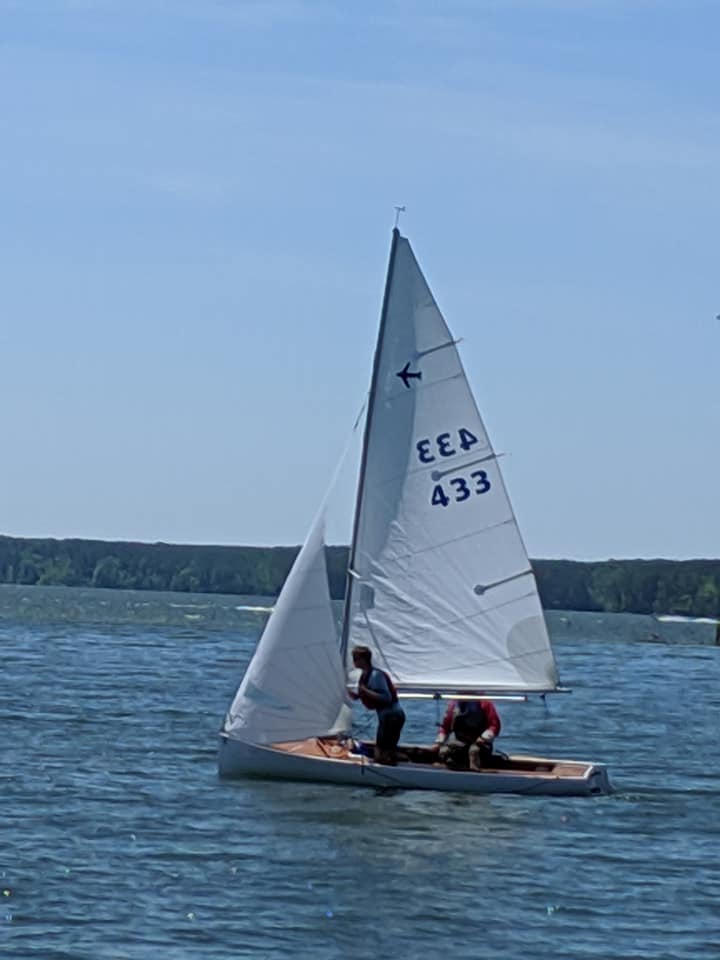 The fleet was puzzled in the parking lot on Saturday as the 5-10 kt forecast had turned into a sea state featuring white caps and upward pointing flags.  In a scene so unreal that you would be hard pressed to find it in a movie scripts, Barry immediately triggered possible divorce proceedings by capsizing just 15 seconds after launch, sending crew and wife Susan into the warm waters of Kerr Lake.  Good start to the day!  Being the expert in capsize recovery, however, Barry recovered quickly and put down a cool 2nd place finish in race 1 to quell the hecklers.  Lenny and Caswell Kern, campaigning #433 this year, were coming off some nice speed adjustments from the Irey and finished just behind Team Saunders.  As a meteorologist who actually believed the weather forecast, Chris Hennon came prepared for the light air by unceremoniously dumping regular crew Kevin for daughter Olivia, who was last seen laying down some roll tacks with her 50 lb. skipper Cole at the Asheville regatta.  They managed to get a great start and hang on for the win in race 1.

It seemed that the right side of the course exhibited a bit more pressure and most of the fleet tried to make it over there as the afternoon progressed.  Sampson and crew Hager Rand (#977) nailed the start in Race 2, crossing Team Hennon with a few taunts thrown in.  The fleet was pretty closely packed at the top mark, with the Janeways (#1115) up in the mix despite sailing with an aluminum mast so thick that hydraulics are required to bend it.  Spinnaker runs, for those that dared, were lively.  Fortunately, there were no dramatic shifts that would engender any broaching movements.  By the second windward leg, 1129 moved out ahead and went into "loose cover" mode over 433, keeping enough distance to insure the win.  Race 3 is pretty much a blur, as quads started to become painful from the long tacks up the course in the heavy breeze.

That night, there were drinks consumed and a complaint lodged.  Lenny believed the 1.2 mile legs were "too short" and didn't provide enough time for his "next level tactics".  The rest of the Jet crew thought he inhaled too much carbon monoxide from his sleeping in an enclosed trailer.  Well, Lenny must have infiltrated the race committee, because the next day a new course was set which is believed to be the world record for Jet-14 course length.  Near the starting line, a high powered telescope was required to locate the top mark, which was set somewhere near Myrtle Beach.  With winds in the 12-18 kt range and puffs exceeding 20, each of the two races Sunday took over an hour, with about 40 minutes featuring quad-burning hiking.  The downwind legs were no picnic either - one particularly strong puff lifted 1129 off the water and sent her on a 45-second plane ride about 40 yards past the leeward mark before she could get off the ride and pack her chute.

In the end, all agreed that the racing was fantastic.  It was great to see the Jet fleet consistently out in front of other similarly handicapped boats in their start.  We really do have a lot of good sailors that know how to handle the difficult conditions.  I'd like to thank Olivia for giving me the best Father's Day gift a man could ask for - time with her on the water.  Finally, get well Tom Grace - see you back on the water soon!