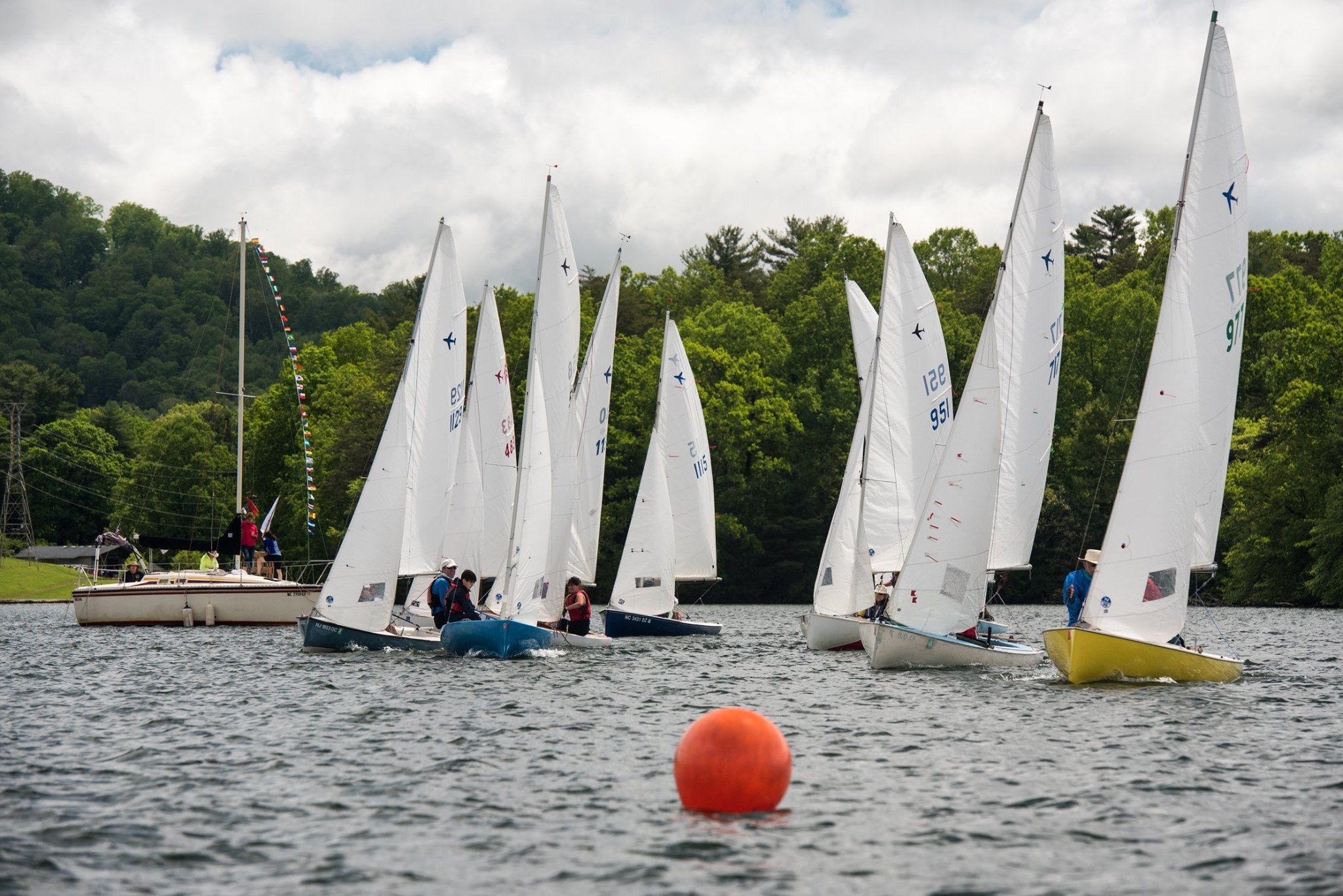 The 8th running of the Jet-14 Southern Comfort Classic featured a potpourri of weather and mass consumption of fried bread.  It also boasted the highest number of entrants in its history with 11 boats registered, including several from out of town.  The favorite was a certain blue boat from New Jersey - the Westgate Sportsbook gave Brent Barbehenn and junior crew Tyler Pennington 101/100 odds to win.  Also competing in the top fleet was Lake Norman YC and 46-time National competitor Tom "Corner Banger" Grace with longtime partner Paula "I can't believe we're back in 717" Pacheco.  Rounding out the out of town boats was Stewart FitzGibbon (1161) from Mohican, and Barry Saunders (737) and Don Janeway (1115) from Carolina Sailing Club.  Representing the local fleet were Chris Hennon and Kevin Trebilcock (483), juniors Cole Wise and Olivia "Watch out, I have my driving license" Hennon (1129), Lenny "Damn Centerboard Pin" Wells and ASC crew Kate (433), Don Read and Lisa Wilcocks (951), and Bruce Sampson with Tom Cannon (977).

To keep tradition, the regatta officially began Friday evening, as many of the competitors gathered at White Labs in Asheville to sample the local brews and consume mass quantities of homemade pizza.  Noticeably absent from the event were Barbehenn - who again underestimated the drive time to Asheville by 6 hours - and Saunders with crew Rebecca Walker, who were rumored to be returning to Durham to retrieve a lost rudder.  Apparently the party continued later at the Bruce Sampson abode, with Grace and Pacheco breaking out their fine line of rum products just for this event.

The weather forecast Saturday was for 80% chance of thunderstorms - not good.   After a short delay because of light wind conditions, Barbehenn stated that "I didn't drive 18 hours to sit here and eat hushpuppies" and promptly rigged up and set off for the race course.  Other skippers, thinking that the 846-time national champion might know something, soon followed and in 15 minutes the fleet was out on the water.  However, the approach of a Mordor-like cloud shield from the west and the rumblings of thunder signaled to the fleet that there would be no racing today, and all returned safely to port just as the deluge began.

With racing cancelled for the day, Brent generously offered to fill in some of the time by talking about making boats go fast and winning races.  It was an interesting back and forth - look for video clips soon!  Soon after the talk, the traditional BBQ dinner arrived and the fleet enjoyed a delicious spread of pulled pork, cole slaw, beans, and of course, hushpuppies.  The BBQ place told me to plan for four hushpuppies, each, but I knew better.  The entire tray of 300 was destroyed, leaving only 4 for the ducks.

Sunday's forecast was for the rain to end around 10 am and a good northwesterly wind to fill in around the same time.  Fortunately, the forecast was spot on and three races were contested in 5-15 kt.  The race committee did a great job setting up a square course in a challenging environment were winds were shifting up to 30 degrees at a time.  As expected, Barbehenn/Pennington worked the shifts well and exhibited nice boat speed to lead the fleet around the course during the day.  Cole Wise and Olivia Hennon (1129), who announced their arrival on the circuit last year by leading a race at Mohican, were light and fast all day and consistently up with the lead pack.  Grace and Pacheco showed their legendary downwind speed to challenge for the lead in all three races.  Also near the top of the fleet in each race was FitzGibbon and local junior crew Hayden Henthorne.  Hayden and Tyler (Brent's crew) were a product of the first junior clinic last summer at Asheville Sailing Club and are moving up to sail in more Jets this year.  It was great to see five juniors racing in the event. 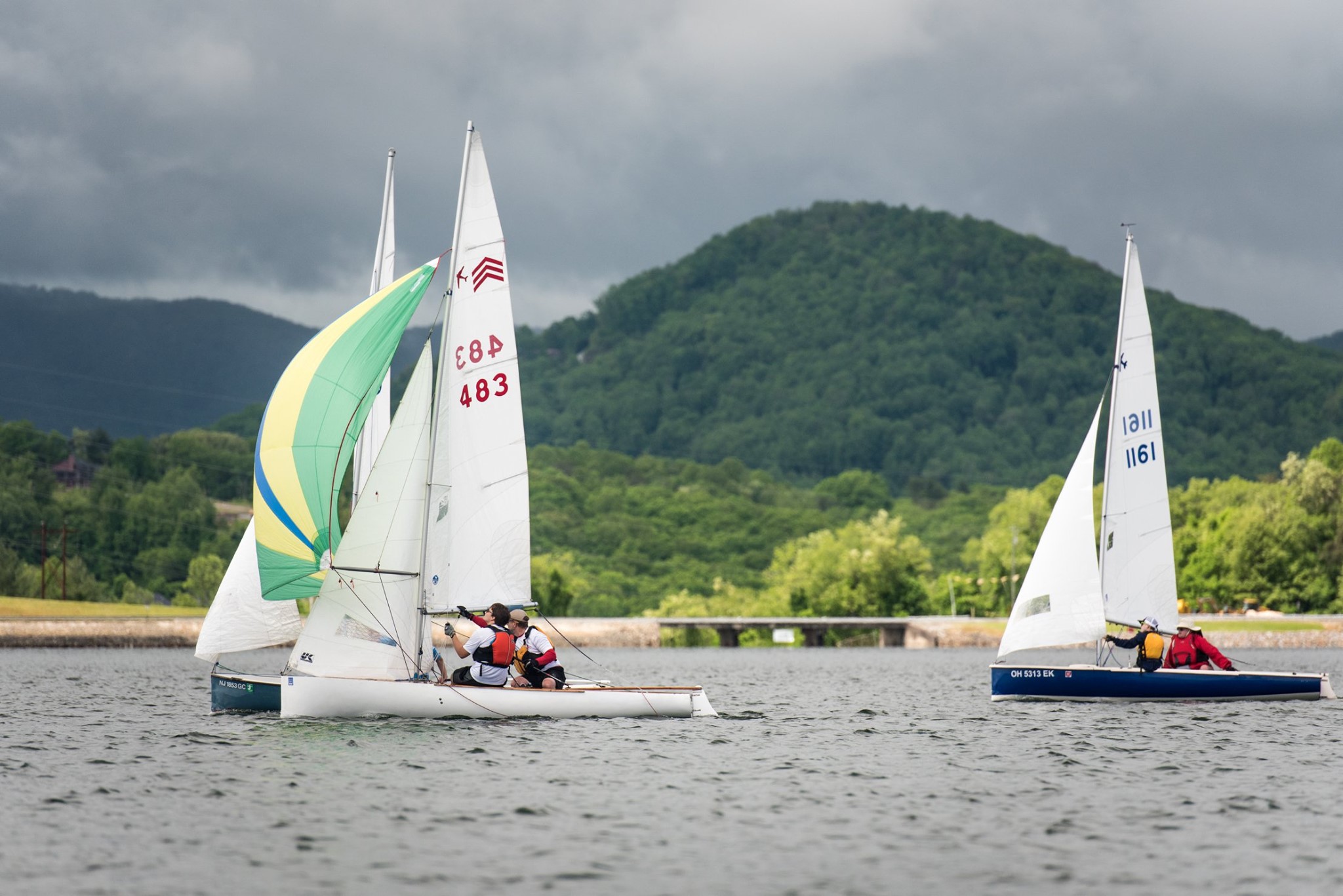 Three races were run and the distances between the boats was small.  The Janeways had a great second race, hitting what Don called a "lucky shift" to take second in the B fleet.  Don will learn that we don't call such shifts "lucky", but take full credit for expecting them to come and being in the right place.  Read and Wilcocks also had their moments during the day.  Don is a racer of several classes, and this was only his second Jet regatta.  We hope to see more of him and Lisa this year.  Saunders and Walker sailed a consistent series, finishing 2nd in the B fleet.  Their results included a rare tie with Sampson/Cannon in race 2.

As everyone munched on "Dave's Dogs" hot dogs and sausages and packed up for the trip home, all agreed that the company was great and that the racing exceeded expectations.  We're looking forward to seeing everyone else who couldn't make it on the regatta circuit this year.