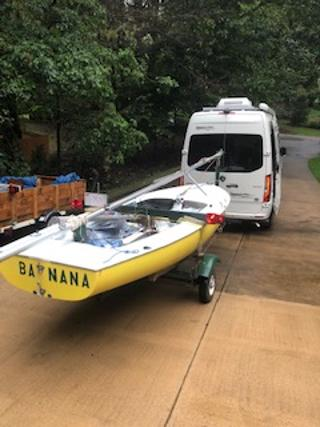 I was thrilled when my wife Jo decided she had enough of Covid isolation and wanted human interaction with our friends in fleet 65. So, we made plans to take the Jet and the Pleasure Way Ascent to Lake Norman for the weekend regatta called the Board Bash. Then Paula Pacheo asked Jo to crew with Tom Grace in her place on Saturday because Paula had a funeral. Now Jo has a “Natalie Wood” complex, deathly afraid of drowning from a boat. Repeated attempts to say “no thanks” did not work, so Jo was on the hook to sail in her first ever sailboat regatta. We packed Jo’s life jacket in the big plastic bag with sails and other stuff in the back of the boat. Was it an omen when somewhere on I-40 on the trip from Asheville to LNYC, that bag ripped open and her life jacket flew out?

Lenny Wells and Teri Fosmire joined Tom, Paula, Jo, and I for take out dinner Friday night.  We ate with some beer and wine on some tables there at the club.  It seemed like we were the only ones there, because Paula Hennon and crew Michele Lunsford, and Chris Hennon and crew Olivia Hennon had not yet arrived, and the other 107 boats were at the pavilion or were also late arrivals.

Chris was the odds-on favorite to win the regatta because he had spinnaker master Olivia crewing, but he showed up with 1048 instead of speedy 483, so this gave the rest of us some hope. We all got our boats ready and headed out to one of three courses the race committee had set up in 3-7 knot winds. Lasers had their own course, Opti’s and 420’s on another, and we shared ours with MC Scows, Vanguard 15’s, and Sunfish. At the start of the first race, Chris had a good start, boxing barging Bruce out at the committee boat. Bruce and Paula went right and the other three went left. Paula and Michele had some issue with their jib rigging, so Bruce (sailing solo) was able to pass them, before tacking to see that Lenny was in good position to round the mark first. Then Bruce caught the first of three lucky wind shifts that day and was lifted right to the mark while Lenny was being headed. Lenny and Teri used the spinnaker to pass Bruce on the next leg. Tom and Jo led Paula and Michele at the intense mark rounding pictured here. On the final leg, Lenny thought he had a big enough lead and did not need to cover Bruce and Tom coming from the right side. Again, the wind shifted in favor of those on the right, and Tom made an unexplainable tack, allowing Bruce to sneak by Lenny for the win. 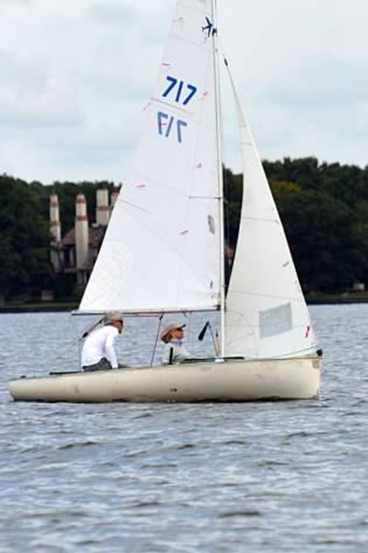 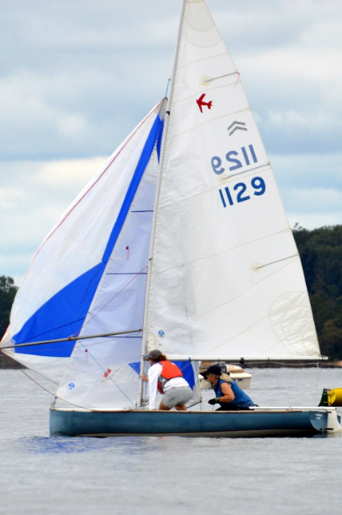 The wind was starting to die as the second race began. Tom banged the left corner, Bruce was in the center, and Chris, Paula, and Lenny went right. About 100 yards from the weather mark, another wind shift allowed Bruce to get to the mark first, and he held the lead on the next leg in the dying wind. Lenny and Chris claim they saw money changing hands ahead of them just before the race committee decided to shorten the course with Bruce in the lead. 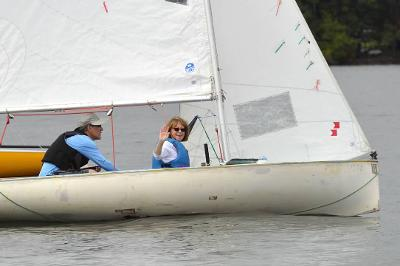 After putting the boats up for the day, everyone gathered by the Pleasure Way for the best part of any Jet regatta, the social time. Beer, wine, and soda were flowing, while Tom and Paula put on their super host costumes and went for the pulled pork, baked beans, hush puppies, and slaw. Trash talking included “lucky shifts” and “race committee bribes”. Jo had great things to say about sailing with Tom in her first races. Even Jo got in on the trash talking. Michele had to get back to Asheville, so Paula H tried to get Jo to race with her on Sunday, but Jo decided that one day was enough. Tom and Paula showed up with not only the food, but with more beverages.

Paula and Tom were back together on Sunday and won the day with a second and a first. Chris and Olivia won the first race of the day with a good start and stayed in control the rest of the race. Tom was a close second with Bruce and Lenny not far behind. After what seemed like 2 hours of sailing around in decent wind, the race committee started the second and final race. Tom and Chris were leading on the first leg while Lenny and Bruce went right and got tangled up with 14 Vanguards coming in the other direction. Lenny made a nice recovery and was battling with Tom for first on the final leg. Chris decided to go about 80 yards past the lay line on the final tack, to take third place. 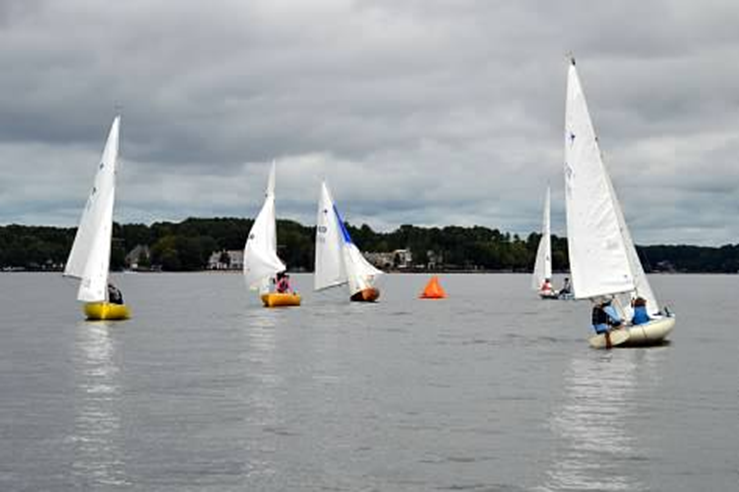 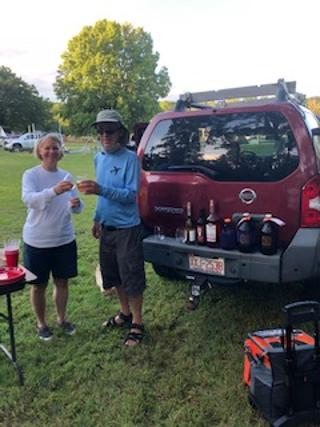