How to make an effective leeward rounding (Dirk Schwenk)

Thanks for the pictures go to George Saunders, a WRSC member, who blasted through at least six rolls during his two days on the mark boat during Nationals 2003. He did an especially good job capturing series of stills on mark roundings – my scanner is not up to the quality of his pictures, but I hope that you can get as much out of this as I did. All photos are from the 2003 Nationals.

In my mind, the rounding has three stages, which generally go along with the approach, the actual moments of passing the mark, and the exit from the mark into full upwind mode. Aside from starts, leeward marks probably offer more possibilities of passing than any other part of the race.

Step 1 – The Approach: Get the kite down and stowed, pole off, sail controls reset and centerboard down so that boat and crew are in a position to go upwind. This should be done in plenty of time to arrange for a good rounding. You will lose a lot more coming out of the mark with the spinnaker up than you will lose coming into the mark with the spinnaker down a few boatlengths early. The windier and/or more congested the rounding will be, the sooner the takedown should start. The author lost the 2004 Parramore, at least in part, because he could not get the kite down when he really, really needed to. If you love tricky stuff – take the pole off early, but have your crew hold the guy out away from the boat while you continue to fly it. But be careful!

Step 2 – The Turn: Set up your final approach at least a boat length from the mark, so that you can do a sweeping turn up to the mark using weight to induce heel, a rapid trim of the main to induce push the bow up. Don’t trim in the jib until you are on the course to windward, as this tends to pull the bow down. 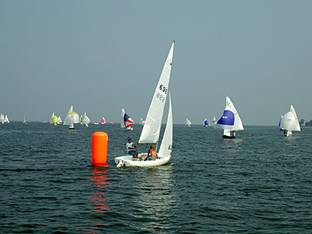 Why does the B Barbehenn have so much mainsheet tension? He is using his main and a little heel, instead of his rudder, to bring the bow up to a windward course.

Step 3: The Exit. The sooner that you can transition to going upwind after the mark, the better. By the time that your boat is passing the mark, sails should already trimmed, and the crew should be in proper position to go fast. Do not allow anyone to pass between you and the mark, unless your bow is well out in front – even if this means slowing down and waiting for a boat to pass by. A hard hike just as you pass the mark can get you to windward of the line around the mark, and prevent anyone from getting inside you as you sail out on port – this is optimum. 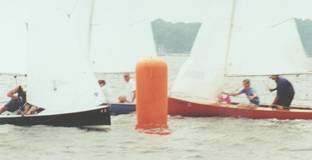 The author approaching the mark, with two boats immediately behind. All three boats have managed step one effectively. Sails are down, and crews heads (except mine) are up. 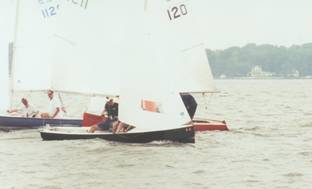 With the mark amidships, everything is ready to go upwind.

As the mark is passed, a hard hike to flatten the boat prevents any chance of someone slipping into a lane to windward. Boats behind will have to tack or be gassed. The outside boat (Charlie Engler) has lost much distance by sailing wide, and it appears that the red hull will pass him.

Here the author loses the leeward mark battle to Brent Barbehenn, ending up to leeward and behind. If my memory serves we attempted to round outside by slightly ahead, but we could not get our bow out in time. Having failed to achieve a safe leeward position, our remaining choices were to foot out through Brent’s lee, or to tack into the path of the oncoming spinnakers. In 3 knots of wind, neither of those choices were very appealing. 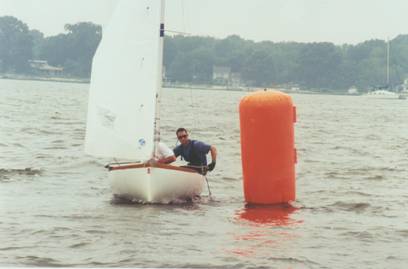 1. Don’t steer with rudder; don’t try to wrap the boat around the mark in less than a boatlength of travel. I typically start turning toward the mark and trimming for upwind from at least a boat length away from the mark so that I start to pass it on a beam reach. In this photo, one of our esteemed and rapidly improving jet citizens gets caught by the camera using less than perfect technique. Positives – kite is down and stowed, and everything appears to be done, so Step 1 has been mastered. What about steering? The jib is eased as the bow comes up, and the main appears to be sheeted in, both of those are good. Also, the boat is right on the mark with no distance lost. But, since there is no heel on the boat, all steering here must be with the tiller, and you can see that the tiller jammed all the way out over the leeward rail. Without heel, there will be no hard hike to accelerate and move to windward. Also, it looks like the line of travel was too close to the other side of the mark, and now they are trying to wrap around tight on this side. This has stalled foils the boat is starting to go sideways at the worst possible time – when a competitor behind could slip inside and sail over the top or a competitor ahead is threatening to backwind you. Finally, it may be that this competitor is pulling in and cleating the main with his left hand as he jams the tiller with his right – proper main sheeting technique (discussed below) would force better technique with the tiller, sheet and body weight.

2. Don’t overtrim trim the jib and undertrim the main. Here we have a skipper and crew who have accomplished step one by getting ready to go upwind, and have set themselves up for a good, wide turn with speed. The boat is heeling appropriately so that it will head up. The skipper, however, has the tiller behind his back, which is preventing him from sheeting in the main. Leeward mark technique requires that the skipper stand up or hike out with the tiller extension in one hand and the sheet in the other, and with both in front of the body. Trimming is done by pulling the sheet all the way over the head, then holding the sheet with the free fingers of the hand that is on the tiller extension. Then repeat. The crew is ready with the jib sheet, but could help the rounding by easing until the bow comes up and being ready to hike the boat flat once everything is in.

Does it work? Yes it does. 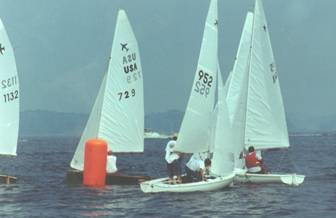 In this picture, a group of five arrives in a tight group at the leeward mark. 1132, Marion Zaugg, must have had a good rounding, and is slipping away. Nate Ireland (729) is in good shape on the three boats immediately behind, as they are now all outside. 952, Chris Jankowski, is pointing downwind, but trimmed for upwind, and so will not be able to accelerate as the turn is made, since all of his sails will be stalled from overtrimming. Chris MacMurray in1145 would have been better off to wait for 952 to sail by, then take a clear lane at the mark, than put themselves in the position that they are now in. They cannot tack because of 952 and cannot foot because of the boat to leeward. They will probably be spit out. 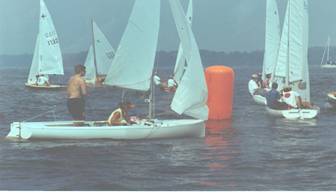 Here is the next group on the rounding. Marion Zaugg is tacking in response to the boat ahead of him – that boat probably rounded ahead, and he will now have a chance to leebow him and pass. 729 is the boat showing inside of Todd Lochner’s (foreground) jib – with 1132 tacking away, 729 is now in a clear lane, and should sail away from the boats behind. 952 is the boat immediately to the right of the mark and ahead of Ted Reshetillof, who is right next to the mark. 729’s air is not too bad, but it appears that distance has been lost on Reshetillof, now just behind. Lochner is at full speed and if he can execute a good clean rounding, he will sail by all the boats that went wide. 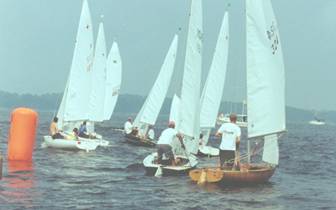 Lochner executes by hiking the boat flat and trimming into high point mode (flat main, leech up, boat flat). With speed, and probably a timely lift and pressure, he creeps up above Ted Reshetillof’s transom, which effectively take the freedom to tack away from the boats that rounded ahead. In the space of 20 seconds, Lochner has caught at least 3 boats, and he is extending on the two boats immediately behind. Lochner has freedom to tack or continue, and may well pass the whole bunch. Paul Joudrey in 324 has hurt himself by sailing outside of Eric Johnson (dark hull, white deck), who still has the kite part way up. If 324 had slowed down during the approach, he could have gone inside Johnson in the dark hulled boat, and been in position behind Lochner with clear air and a lift. 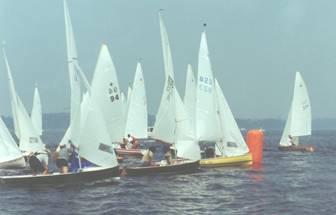 It is not possible to distinguish the face of Joudry in 324 (far right), but one must imagine that he is looking back in dispair at the boats behind. By rounding outside, he has lost the boats that he rounded with, and been passed by the group (including 94) that were close behind. He is now in bad air, wide of the mark, and the door is open to be passed by any boat that makes a decent rounding. He probably does not have enough speed to tack. He is in the dead zone beneath all boats – and he is not going to escape any time soon.

There are fundamentals to rounding the leeward mark and they can be practiced, learned, and excecuted. A wide approach and a tight exit is the only way to ensure a transition immediately into upwind mode with speed. To be effective, one must steer with weight and the sails, which in turn requires the skipper to stand up and use proper mainsheet technique, and requires the crew to delay trimming the jib, while being responsive with his or her weight. Its not rocket science, but it does not hurt to practice, either. Good luck!