Because it's a two-person dinghy, a Jet-14 can be particularly challenging during spinnaker hoists, jibes, and douses.  At times it seems as if there are not enough hands on the boat.  Most problems seem to occur when the skipper is in the back of the boat steering and the crew is trying to manage the pole while the chute is snapping violently in the breeze because no one has a hand on the sheet or the guy.  Does this sound familiar?

We are going to address three of the most common spinnaker problems that we've experienced and ways in which we try to avoid them.

Situation: The weather mark is a port rounding. The spinnaker is appropriately stored on port. The skipper bears off toward the jibe mark and hoists the chute while the crew frantically tries to put the pole up. Problem: Both sheet and guy, have by this time, run out to the knots, the spinnaker is flapping wildly in the breeze and the sheet has conveniently wrapped itself around the end of the boom. Uh-oh, messy problem. There's some serious yelling on this boat.

Situation: You're approaching the jibe mark on starboard. The spinnaker is flying quite nicely and it is blowing about 10 knots on a sunny Sunday afternoon.

Problem: The skipper turns the boat, the boom crosses, the chute collapses, wraps around itself and ends up between the forestay and the mast. In other words, you've a hell of a wrap, which resembles an hourglass! 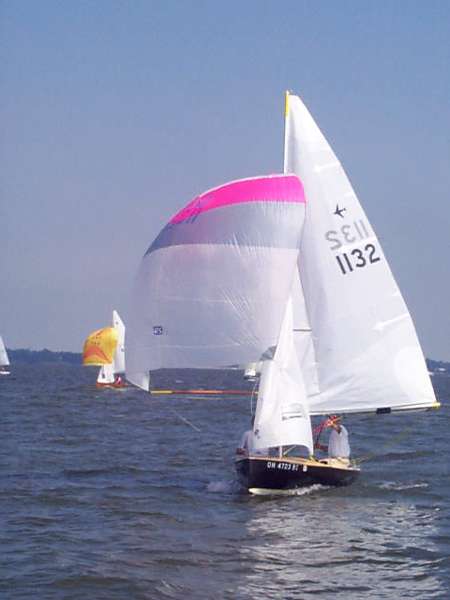 Prevention: Before the jibe, the sheet and guy need to be 'prepped' for the jibe. The first step is to snug up the slack in the tail end of the guy. Then, the crew should hand the skipper the tail end of the guy and then remove the guy from the guy hook on the deck. Now the boat is ready to jibe. As the skipper turns the boat through the jibe, he pulls back hard on the guy which will bring the spinnaker around the boat. (This is known as 'squaring the pole back' during the jibe.) The boom crosses the boat and the spinnaker is already on the proper side of the boat. The crew jibes the pole, hooks the the new guy, pulls the guy back and takes the new sheet from the skipper.

Situation: You round the weather mark and immediately jibe onto port tack and are heading for the leeward mark on a broad reach. There is a brisk breeze, you're in first place and Rhett Simonds is nipping at your heels! It's time to set the chute!

Problem: During the hoist the chute gets sucked into the triangle between the forestay and the mast.

Prevention: The 'toss set' is the way to avoid this nasty problem. This may be somewhat awkward at first, but with practice will become simple and quite effective. The crew gathers the spinnaker into their arms, pulling out plenty of slack in the port sheet and being careful to keep the head clear and not to cross the clews or twist the chute in any way. The skipper needs two hands free to hoist the chute, so he should place the tiller between his legs and be ready to hoist. On the count of three, the crew tosses the spinnaker in front of the forestay (NOT UP) and the skipper hoists quickly to avoid letting the spinnaker drop into the water. At this point, the chute is clear of the triangle, on the proper side of the boat and is filling with air. The skipper takes the sheet until the crew is finished setting the pole.

There are many other 'incidents' that occur while flying the spinnaker. We've tried to explain how to avoid some of the common ones. If you ever find your spinnaker submerged behind the boat and serving as an excellent anchor, don't despair as another competitor sails over it - just know deep in your heart that it has probably already happened to someone else.

Don't let the sheet fall under the boat. This is big trouble. Pull the sheet tight around the headstay while the spinnaker isn't in use so it can't fall down.

When you're doing a reach-to-reach jibe always cleat the new guy under the guy hook and pre-cleat it before you switch the pole. This will keep the spinnaker from becoming a giant kite tied to the top of your mast.

Don't pull it up unless you're reasonably sure you can carry it.  If you pull it up and then have to take it down you'll lose boats.

If the boat starts to oscillate, prevent the impending death roll by stretching the spinnaker flat by pulling both the sheet and the guy. Also, sheet your main in and drop some board.

If you're lowering the spinnaker at the last second before rounding a mark, let your pole dangle from the topping lift until you're around the mark and have settled down to the next leg. You can even come about with the pole dangling.

Make sure to carry the pole high enough in heavy air. Otherwise the top of the spinnaker will be too full and you will have trouble carrying on a tight reach. People tend to carry the pole too low. Get the clews even.

Don't let the boat heel on a reach. Anticipate puffs by hiking and heading off before the boat has a chance to heel. Keep a neutral helm. If you're slow to head off, the boat will develop a lot of weather helm very quickly and broach.

Lower the board far enough to avoid any lee helm on a close reach. We lower ours all the way to get the helm to balance out.

Adjust the pole uphaul frequently in flukey air. Otherwise, the pole height will be wrong a lot of the time. If the wind drops and you don't lower the pole, there won't be enough wind to support the luff of the spinnaker and it will tend to collapse.

Steer carefully and keep the helm neutral by using your weight. Don't let the spinnaker distract you. Try to settle down quickly after you do a jibe or pull it up. We sit down as soon as we can. I feel comfortable downwind sitting to weather with the crew to leeward. Don't get frustrated and fiddle much if boats catch up.

Don't pull the spinnaker up right away on the first reach if you know you'll get run over immediately. If you're right behind a boat who makes that mistake, run over the boat immediately and then put your spinnaker up. If you round the weather mark behind boats playing that game, head low and pick them all off by getting inside at the next mark.

When you round the jibe mark look for chances to pass boats who flew the jibe by going to weather of them. Make sure you make a tight rounding and hold high so no one can pass you to weather.

The skipper can prevent the sheet from flipping over the end of the boom during a reach-to-reach jibe by holding it during the jibe. Grab the old guy (new sheet) before the jibe and hang on to it until the jibe is over and it's pulled in.

Do it the same way every time and don't rush.