The problem with our May regatta is that it sneeks up on me, every year. So I was again late, getting a race committee organized, fliers out, my boat out……with results I have learned to expect.

All our race managers were committed elsewhere for the Memorial Day weekend. So Stewart FitzGibbon ended up not sailing so he could run our races. To compensate for not having Stewart sailing, we gained the fringe benefit of our netting Heather FitzGibbon to assist on the committee boat and along with Stewart, my sister Barb, and Mike Chambers, work in the kitchen both days. Thank you again to Stewart, Heather, Mike and Barb. 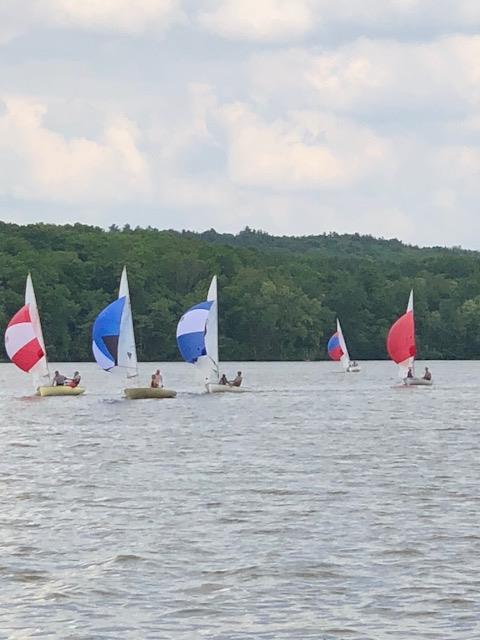 Class President Seth Parker got(?) confused, thinking…..”the Mohican Regatta is in October”……….And his Uncle Dick “the apple does not fall far from the tree” Parker, responded with, “ October!   We have plenty of time.”

So eight boats lined up for the first race, a couple hours after a short down pour earlier, around 11:00 a.m. The next batch of rain expected around 4:00 p.m.

We got up the beat in maybe six knots of air out of the south, Bryan and Tiffany Parker back and forth with P.J. and Nate. By the second beat the wind was going softer. Bridget Ireland and regular crew George Auer tracked us down on the second run, although we did manage to hold off Erinie Michaud with Johathon Maude on as crew.

Race two and the wind was back up in the six maybe even eight knot range. Bridget and George got off the line well and rode a good puff away from the weather mark for a 50 yd. lead. But then we all rode a gust down the course and things tightened up pretty well again. Bridget made her lead stick for the win.

The third race had maybe the best wind, and good close racing up and down the course. It was now near 4:00 p.m., the forecast called for a line of storms, but no sign of them. So Stewart advised us we would race one more, one lap with a finish at the end of a second windward leg, right in front of the clubhouse. Well some kind of weather was trying to move in, and the wind would just quit and then start from the opposite direction with boats 20 ft. apart sitting still or one going dead down wind and the other beating. A little wacky even for Mohican. Ivan Baker and daughter Kylie seemed to have it figured out and pressed the front of the fleet for a close third.

So, in for dinner and yes just as we were sitting down to eat big down pour. Pretty good timing.

Sunday we managed three out of four really good things. The He-Man Breakfast maintained it’s fine form despite being short of kitchen staff. Barb filled in for my step daughter Emma, and well, let’s take her word that the griddle was not functioning properly, and that a possible fix was to throw several pieces of French toast in my general direction. 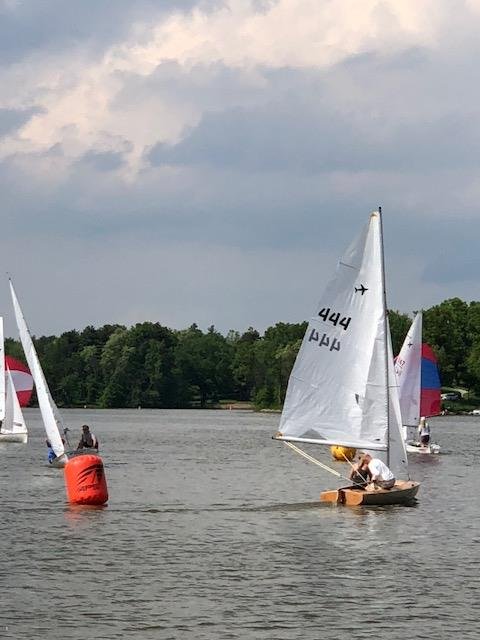 The bad thing, there just was not any wind. As we waited a Round Robin Ping Pong Tournament formed, with the entire fleet and committee circling the table in a sudden death elimination shoot out. Tiffany and Kylie both claimed to never have set eyes on a ping pong ball before, then proceeded to eliminate various players with an assortment of slams and cut shots.

Still no wind so we packed up the boats and readied them for the trip home. So, hamburger lunch and awards. The Parkers schooled us most of the day. They were thrown off stride only momentarily by some first rate trash talk on my part. The food, Ping Pong and Sailing all got high marks. Thank you every one, for your most generous gift, your time and support.