Seven Jets based at the Asheville Sailing Club were joined by three other North Carolina boats to contest the 2018 Southern Comfort Classic regatta.  It was a deep and competitive fleet - five different boats would win at least one race over the course of eight contests. 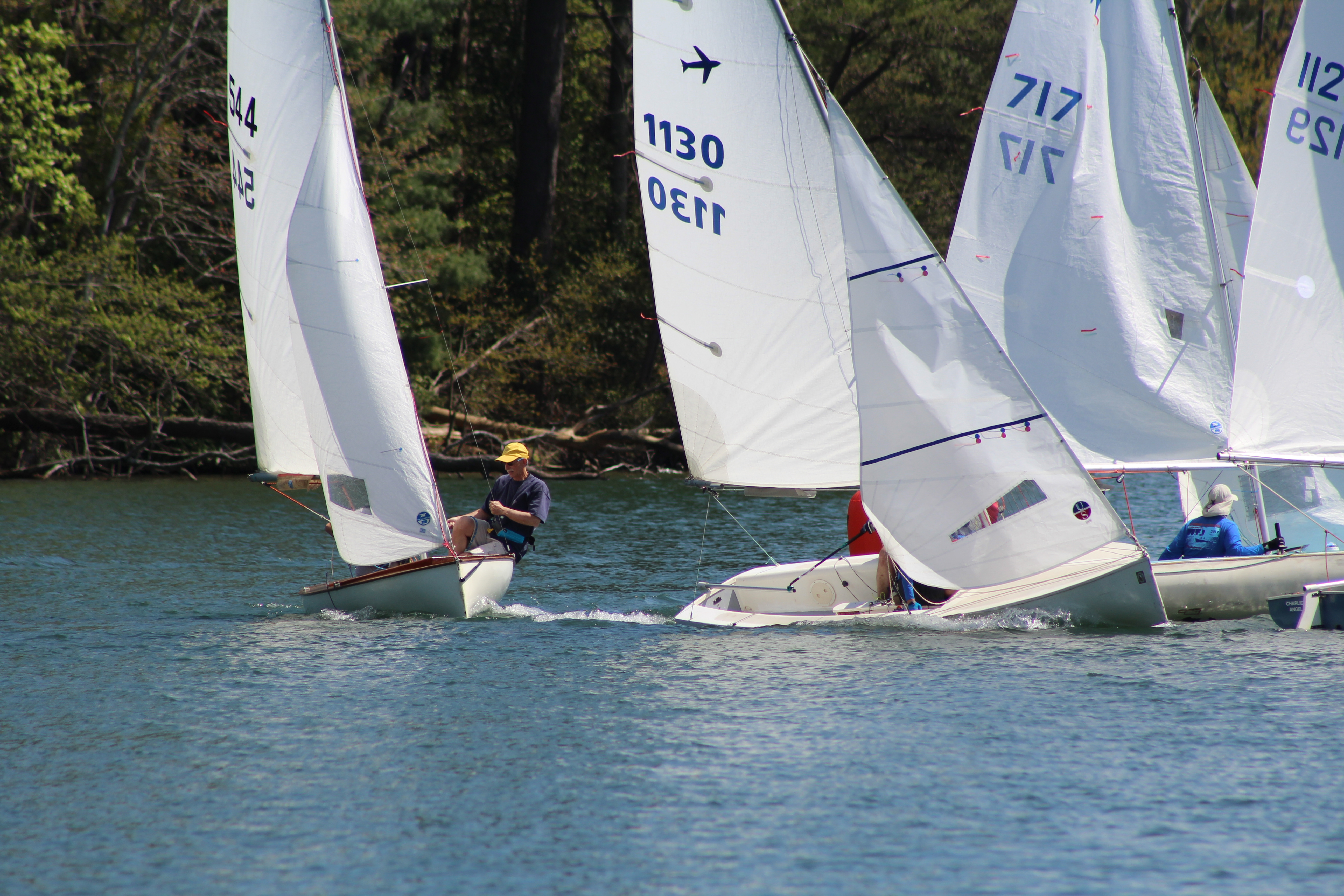 The weekend began with dinner and drinks Friday night in downtown Asheville at the Aloft Hotel.  Lenny Wells (#1130), always planning ahead, stayed home while his competitors (Chris and Paula Hennon, and Tom Grace/Paula Pacheco) sampled nearly every beer on tap in the city of Asheville.  Unfortunately, there would be no dart contests, meaning Chris' best chance of winning something this weekend did not happen.

The weather forecast was a bit ominous, with sustained NW winds in the teens and gusts into the 20s.  Barry Saunders and Rebecca Walker (#737) from Carolina Sailing Club arrived with all of their capsize gear in tow.  They were joined by Tim Porter and son Lucas from Lake Norman Yacht Club, site of this year's Jet Nationals.  The first race went off without a hitch as Lenny and verteran junior crew Caswell Kern established themselves as the favorites as they raced out to an early lead.  ASC crew Bob Mitchell and Teri Fosmire (#1128) were the first crew to sample the pleasant bouquet of the Duke Energy powerplant cooling lake as they got caught in a nuclear puff during a tack and took a trip to Turtle Town up the first beat of the day.  Unfortunately, they were unable to recover and had to retire for the remainder of the day.  Wells and Kern finished off the fleet with a victory, followed closely by Grace/Pacheco and Porter/Porter.  Relative newcomer Chris Dyko and Gary Merrill (#544) showed no fear and raced hard to a fourth place finish.

By this point the course became a bit skewed to the left side and the windward/leeward legs became mostly a tight reaching exercise.  Wells and Kern took advantage by establishing another lead in Race 2.  Their verteran boat handling and mark rounding made it difficult for anyone to pass.  The Porters showed great boat speed to place another solid second.  Chris Hennon and crew/daughter's boyfriend Kevin (#483) dogged it for the second race in a row and had Hennon making some adjustments to the rig in between races.  As one Hennon was slow, the other (Paula) was just heating up.  Paula and crew Neal Bunce (#1129) took third in the second race with promises of better races to come.

ASC members Bruce Sampson and crew Tom Cannon (#977) had some kind of mechanical malfunction and had  to return to shore for Race 3.  After another mediocre start, Hennon and Kevin found a little more boat speed and a lucky "losers breeze" to lift them back into the middle of the pack.  Some fortunate puffs and a disputed rounding with Grace and Pacheco allowed them to take down the race.  Paula and Bunce returned the favor in Race 4, finding a magical Lake Julian puff to handily take it down.  Speaking of taking it down, Sampson ensured that crew Cannon would continue his streak of capsizing every time he stepped foot in a Jet by losing his balance to the low side during a puff and sending #977 onto her side.  This would be the end of the regatta for the yellow banana boat. 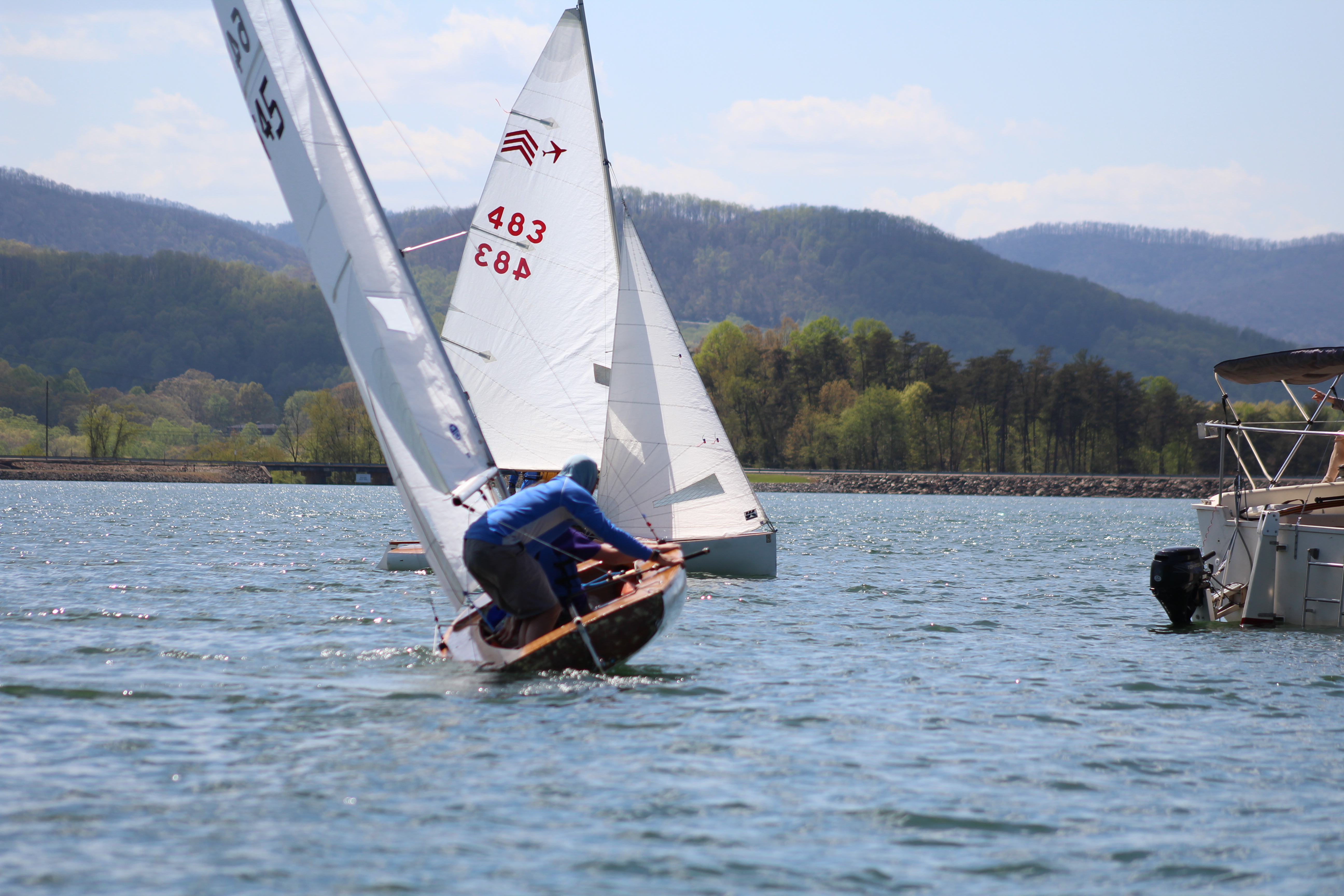 Luella's BBQ provided an awesome dinner Saturday evening at the club consisting of pulled pork BBQ, chicken, vinegar slaw, mac-n-cheese, and green beans.  Unfortunately, budget cuts precluded hushpuppies from being included on the menu as the club was still paying off loans from a couple of years ago when Barbehenn showed up and consumed $562 worth of hushpuppies in one weekend.

Going into Sunday's racing, Wells and Kern were one point ahead of Team Porter, with #483 four points back.  Saunders and Walker had a sizeable advantage on the B fleet and merely had to stay upright to win.  Well, they didn't exactly do that.  In fact, the crowd watching the racing from the shore at one point thought that #737 was doing capsize drills just to show off.  But they popped right back up and killed the last day, taking a 2nd and 3rd and finishing the regatta in 4th place overall and 1st in the B fleet.

The 10-15 kt breeze with puffs into the low 20s also presented some challenges around the leeward mark as the fleet had to navigate a tricky gybe in close quarters.  Don Read and Laura Beeler, fresh off of a Day 1 which included a 3rd place finish, decided to demonstrate the risk of gybing with the main sheet cleated, resulting in a trip to Turtle Town with a "mast impaction in mud" bonus.  They were in good spirits afterwards though and are planning to race other NC events this year.  Chris Dyko and Gary Merrill (#544) had no such issues over the weekend, staying upright and showing flashes of boat speed that we all know is in #544's DNA.  Their 6th place finish overall included three 4ths and a 3rd in the last race.  Both Chris and Gary are new to Jet racing - we're looking forward to seeing them at the next one!

The A fleet crown would be decided #1130 and #483 as Team Porter had to leave for home the previous evening.  Lenny showed the fleet who would be boss this day by ripping through some practice gybes and tacks before race 6... and then promptly heading into a cove of bushes near the shore and grounding his boat.  Apparently a critical pin holding a shroud came undone and emergency measures had to be taken to save the mast.  Park officials are still investigating if Hennon's crew had any involvement.  With Lenny and Caswell starting Race 6 10 minutes late, the door was open for #483 to make up some major ground on the leader.  But instead of going through the door, #483 went right into the wall next to it by fouling a couple of boats and racing in DFL for much of the race.  Grace showed why he has 124 tell tales on his main and reminded the fleet that they were still in this by taking the race down.

A close victory in Race 7 by #483 left Chris and Kevin one point ahead of #1130 heading into the last race.  Alas, proper order was restored and #1130 lead from start to finish to take home the championship in a tiebreaker.  Much thanks are in order to the numerous volunteers at the club that made this event possible.  We're looking forward to helping Tom, Paula, and Tim put together the Jet Nationals at Lake Norman Yacht Club this August. 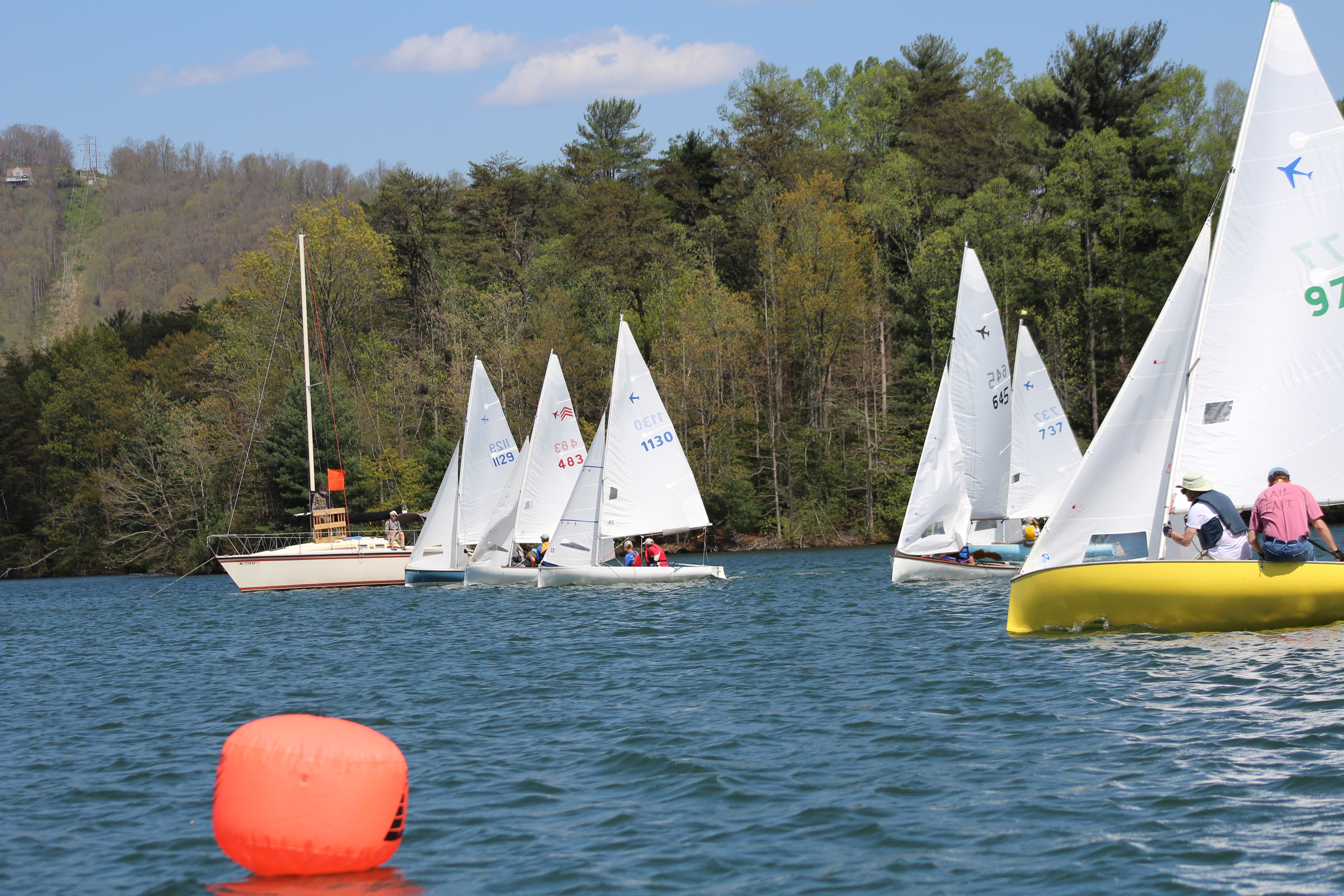