As I took inventory of the supplies at the club on Monday, the week before the Halloween Classic, it was 88 deg., sunny and not a ripple from a breeze. So when we saw the forecast for the regatta that coming weekend, highs near 50 deg. and lows near 40 deg. and rain and maybe 5 knots of wind, the few supplies on hand looked like maybe more than enough.

Some may have changed their plans and did not join us, but hard to tell after 15 boats registered to race.   And many of those made an extra effort getting crew, or travelling, or getting their boat repaired in time to be here. That all is absolutely not lost on me. Thank you one and all. 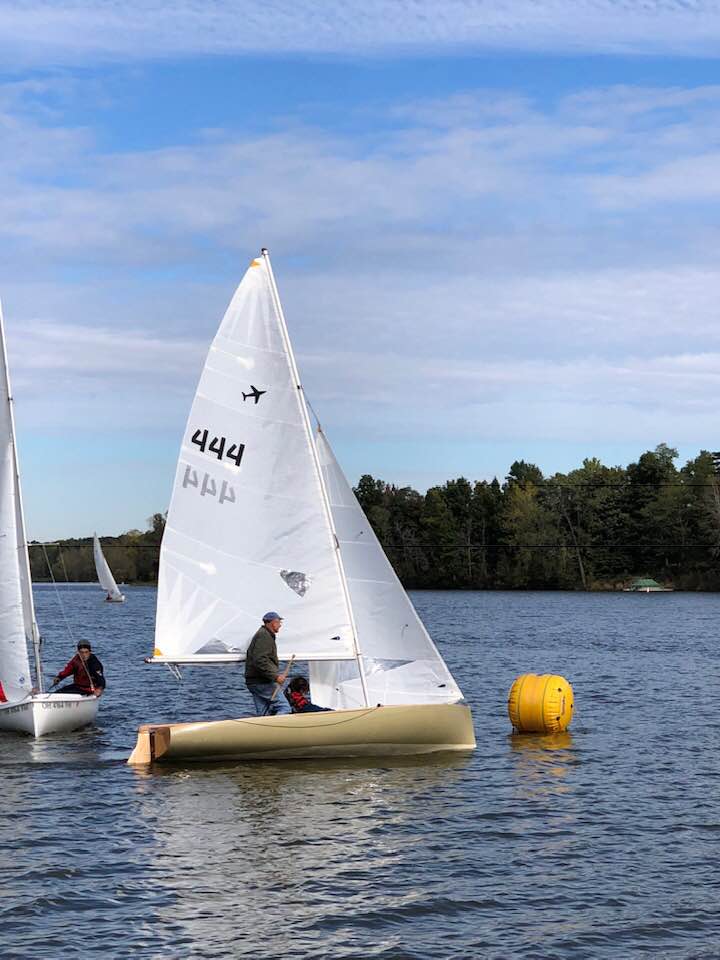 As in, Class Secretary Tiffany Parker could not find anyone to watch her two boys for the weekend, but instructed Class Treasure Bryan Parker to find a crew and go. Bryan offered to stay at home and help watch the boys but Tiffany insisted..." two little boys to entertain will be plenty, thank you"......So we got to have Ben Stock crewing for Bryan, which turns out was a slightly above average combination.

Dick Parker managed to get Seth Parker as crew, and apparently there is some kind of strange physics where two negatives equals a double positive, or two numskulls equals one smart guy, as they put up all top 5 finishes, closing out with 4 top 3 finishes.

And Hank Boissoneault brought Carolyn Zettler, (what a complete delight these two were on and off the water) borrowed a boat and led the first race all the way to the final mark. Or Lenny Wells that left N.C. at 8:00 a.m. Friday to make sure he didn't miss anything, or Chris Hennon who worked evenings the week before to close up cracks and holes in #483's hull, or Paula Hennon who got herself, another boat, three Jr's and a guest all to Mohican at around 2:00 in the morning on Saturday, thanks to among other things a flat tire on the trailer midway.

Not to be out done, Ernie Michaud's Crew Marsha Elyashevich brings newly minted husband, (one week married) and declares the Halloween Classic their Honeymoon!

So, Saturday morning, 41 deg., the rain just having stopped around 4:00 a.m. and everyone is arriving and rigging. Mike and Jon Chambers serve up another well received hot ham lunch with all the sides including macaroni salad that is so good we caught several loading up their bailing buckets so as to enjoy more out on the water.

First race, maybe the best air of the weekend but right at the start it shifts hard left. One tack to the mark and too tight to make the spinnaker work well on the way back. Hank and Carolyn in #1132 make it work anyway and lead downhill in what should be a run. Zaugg is accidently in the right spot upwind and down and looks surprisingly smart. Even more interesting, several boats jockeying before the start have members of Sesame Street cast on board, very fun.

Race two, after a course adjustment has the fleet packed tight all the way to the finish. Chris Hennon with Kevin Trebilcock crewing sails a first rate race, ignoring the not yet fully cured epoxy cracking all the way around the course for a very solid 3rd. Jacqueline and Joe Minerd had #1134 going better, in the top five all the way to the last mark. I have to say it, they sail better than I do, #1134 is just not set up right.

Race Three and Mike and Jon Chambers have #1133 going very well, missing a win by a few boat lengths.

Race four, the last race of the day Saturday and great wind half way up the first leg and then nothing. Parking lot at the top mark. It fills in and everyone scrambles for a lane. Lenny Wells gets clear along with Tom Grace and Paula, and they both sail solid the rest of the way for a 4th and 5th.

In for dinner. My crew and sweetie Elizabeth decided a taco bar with enchiladas would be a nice treat, which it certainly was, but required her to shop and cook for two days. We were cleaning up when some odd sounds filtered down from the upstairs.   The entire cast of Sesame Street and others, in full costume, march into the kitchen. Olivia Hennon is declared the costume contest winner, edging out Tom Grace who looked like a cross between Mark Twain and Yosemite Sam. 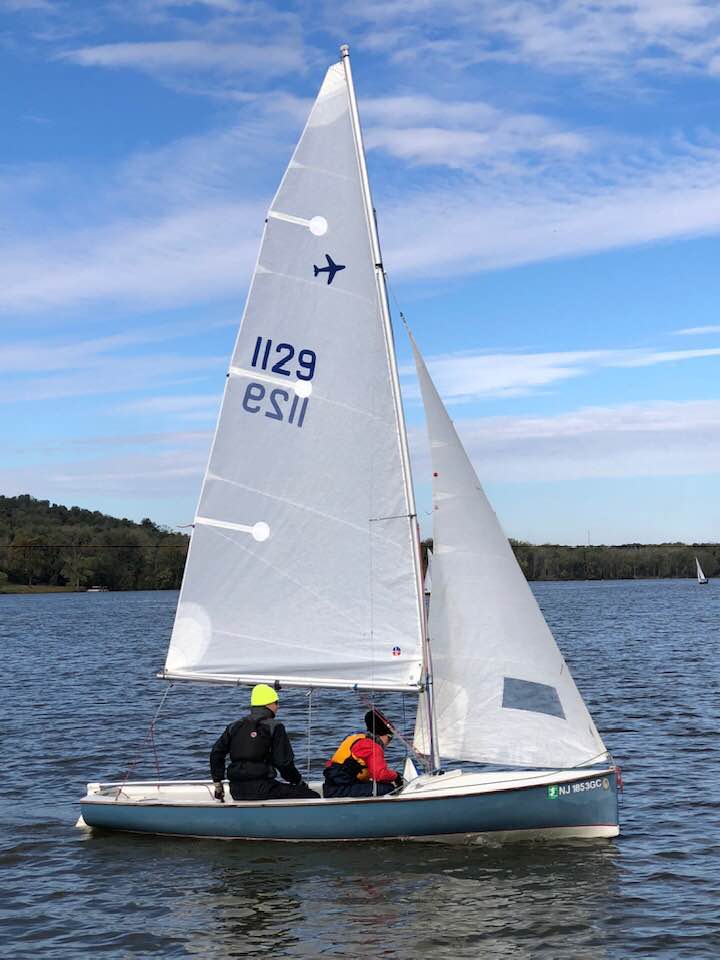 Sunday morning, we had quite a few campers in the clubhouse and so 20 pairs of eyes were on us as we fired up the He-Man Breakfast. Bryan Parker was so ready he cut up forty slices of bread for the French toast. Any good? Cole Wise....." they said these pancakes were pretty good, but I wanted to test them for myself.........first rate and number 11 was even better than the first one."

The wind as is typical at Mohican in the morning was barely filling in, but it looked to be sailable. Elizabeth and I were a little late getting off the hoist so I suggested she push off and jump in. Not my best choice of words, she did. We both landed in the bottom of the boat with the tiller cleanly broken. Did I mention that Jaqueline and Joe sail better than I do?   Did I mention EVERYBODY sails better than I do?

First race Sunday and Bryan and Ben are just schooling us.   #483 and #1133 are right at the front at the first mark. At the finish, my sister Barb and nephew Paul in #94 have come from pretty deep for a close fifth, overlaped with the #1133 in fourth.

Last race, pretty nice air, sun and temps. to wrap the regatta up in. The pancakes are really paying off as Cole and Olivia in #1129 shoot out to the front of the fleet and fight it out there all the way down the last run. Ernie Michlaud and Marsha, sail a great second run and make it stick for a solid fourth.

50 plus deg. and sunny as we unrig and have to head for home. That is a lot of travelling and effort for all of us to spend a weekend together, sharing our company, sailing, and eating. Glad we did.

Hope to see you all next year.