Jets returned to West River Sailing Club for the Irey Memorial Regatta and to tune up for Nationals this August.  The Irey also served as the Atlantic Coast Championship for this year.  Seven boats registered and six raced.  Doug Brown and Susan Mallows represented Hunterdon Sailing Club in "Boeing 747", Fleet 65 sent three contenders (Wells/Berchem in 1130, Hennon/Russell in 1129, and Porter/Porter in 645), and two SSA boats rounded out the field with the Parramores and James and Koralina McKenna, just married in the past year.

The early arrivers came Friday evening and met Michael Parramore on the club grounds, who was getting his Jet (646) out of mothballs and into competitive shape.  He duct taped his compass to the mast, intimidating no one.  Parramore attempted to tire out the fleet by getting them to join the Friday night WRSC racing, but no one took the bait.  The wind forecast for Saturday was a bit dicey, with light easterly winds gradually turning to the right.  Tim Porter, a former WRSC member for many years, arrived in the morning and informed the fleet that his daughter Madison, the defending "youngest sailor at Nationals" champion, would be helming this weekend in preparation for her Nationals skippering debut in August.  She did a fantastic job all day, even taking the fall by fouling about 26 albacores in a 30 second span during the last race to keep them off the rest of the Jet transoms.

After a false start because of a big lull, the race committee did well to get off 5 races Saturday afternoon.  Several things became clear as the afternoon progressed.  First, the anticipated "marriage penalty" for the McKennas, which for spousal teams usually manifests itself as an unending stream of bickering and indecision, failed to materialize as they sailed smart and fast all day.  I guess it's only been a year.  Second, the right side of the course, for some reason still unknown to yours truly, seemed to pay off just about every time going upwind.  Wells/Berchem took advantage of this for nearly every single leg and found themselves near the top of the fleet each time.  Hennon/Russell on the other hand kept going left with the thinking of "this side has to pay off at some point".  Third, current became a factor toward the end of the day as the fleet started wondering why each tack kept taking them farther away from the mark.  The last race was sailed in the best (8-12 kt) wind, albeit on a skewed course that heavily favored the right side going up and the left side going down.

After a delicious dinner at the Pirate's Cove on Saturday evening, most competitors turned in early to rest up for a heavy air day on Sunday.  An approaching cold front with thunderstorms and strong southerly winds scared away a couple of other fleets but five Jets headed out to determine the Irey champion.  Race committee provided a good warm up with what seemed like a 42 mile reach out to the race course, presumably somewhere off the coast of Bermuda by the time we all arrived.  Conditions were actually quite nice, with overcast skies and a strong but manageable 12-16 kt southerly and reasonable waves.  Three Olympic style courses were run.  Wells/Berchem assumed that meant that it was OK to cross the start line early, as they were called over in every race.  A lost tiller extension compounded their misery and they were unable to make a run at the championship.  Hennon/Russell kept pace up the beats and sailed a couple of clean races but failed to fly the chute on the reach legs, costing them precious distance and any chance at making a move.  Michael and Laury Parramore sailed flat and smart all morning, taking first in the last race.  Doug and Susan sailed well in the heavier conditions but just could not overtake those "young guns".  Team McKenna solidified their position and made it be known that they will be a force at Nationals.

Thanks to Tim Porter for getting this event on the schedule and getting boats to come - it was a fantastic regatta at a great venue.  Looking forward to seeing a lot more boats there at Nationals in August. 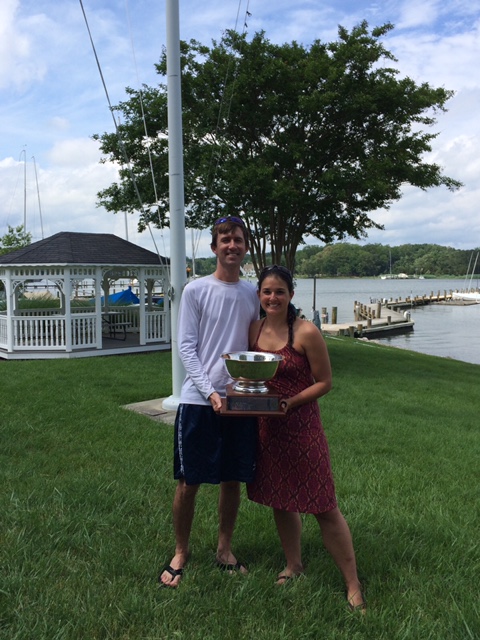