The 2016 edition of the opening regatta on the Jet-14 circuit promised to be an excellent affair with attendance reaching an all time high.  Joining the six Asheville Sailing Club yachts were four other North Carolina boats and two from out of state.  Also featured were two Junior crew members.  Some of the contenders arrived the previous day to witness the annual darts beatdown, but unfortunately Team Michos was unable to attend this year. 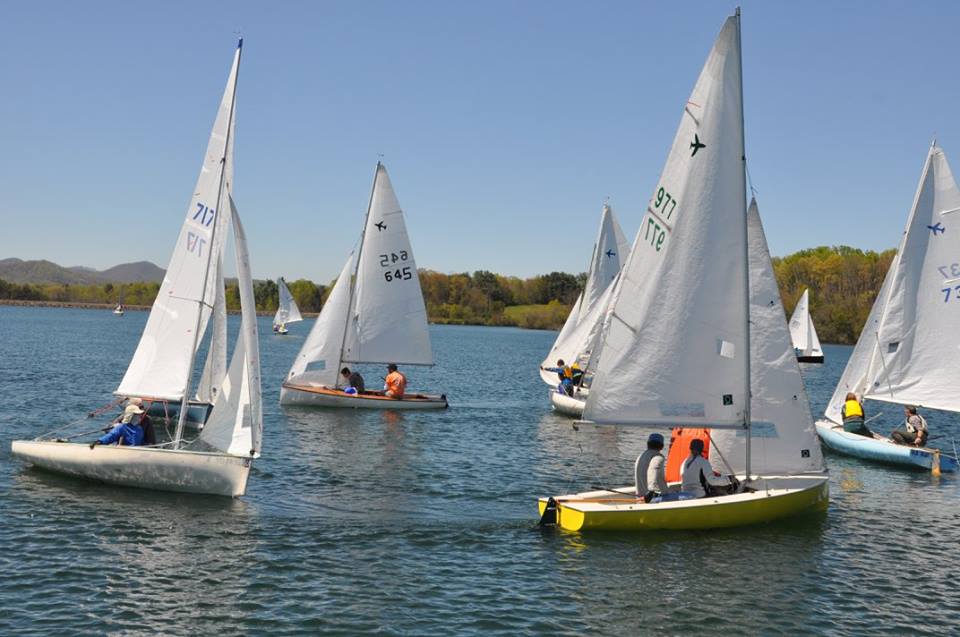 The weather forecast looked promising on Saturday, with easterly winds in the 5-8 kt range and blue sky temperatures nearing 70 degrees F.  The actual wind during racing was more of the bingo sailing variety, with puffs coming out of seemingly every cove and racers looking fantastic one minute and dumbfounded the next.  The conditions didn't seem to phase 94-time (approximately) national champ Brent Barbehenn and ASC crew Lee Soko, who won the first two races in comfortable fashion.  ASC boat Lenny Wells (#1130) and junior crew in training Caswell Kern knocked out a couple of seconds to secure their position at the top of the pack.  Also looking good early on was Connie Berchem and Teri Fosmire (#951) and Mohican Sailing Club stalwart Stuart FitzGibbon, who simply put on a clinic in boat speed all weekend.  Paula Hennon with daughter Olivia also showed off good boat speed and finished well when they were able to keep the boat from being over early.

Winds were up a bit for Race 3 and more in line with the longest part of the lake, allowing the race committee to set up a long two lapper.  The luxury length starting line set up for the first two races was reduced by about 80%, making real estate a premium at the gun.  Hints of an upset were in the air as Barbehenn managed to get buried in a pack of starboard tackers just after the gun, all following Lenny's instructions to "run that guy into the rocks".  Chris Hennon and Lacie Wells pulled off an accidental port tack start at the committee boat and rounded the top mark first, right along side Tim Porter and son Logan.  Hennon and Wallace managed to extend the lead for the next 2 1/2 legs to about 100 yards and were already celebrating their victory when a puff emerged to left and leeward of the final beat, taking the entire fleet up and over #483, who had only 30 yards to the finish line.  FitzGibbon led the pack in to the finish with Barbehenn making up some boats late and finishing 2nd to preserve his slim lead over Wells/Caswell.  Barbehenn and Sokol recovered nicely in the final race of the day and had another comfortable win.  FitzGibbon led a pack of 3 chasers over next which included Bruce Sampson and Eileen Gertz (#977), who had their best race of the series.   At the halfway mark, two boats had seperated from the pack (#558 and #1130) with a group of 6 all within 2 points of each other. 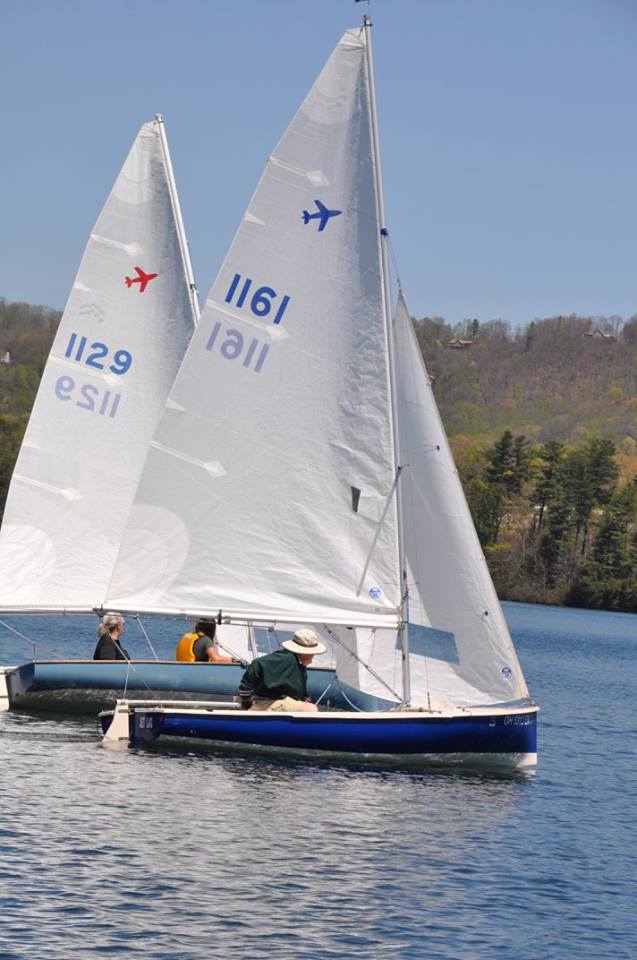 Ever since the arrival Barbehenn on Friday, Vegas was taking bets on the number of hushpuppies that he would consume at the BBQ dinner that evening.  If you would have bet 15, you would have been too low.  In an impressive display of ravenous consumption, Brent ate approximately (the exact count is unknown) 17 hushpuppies, and was constantly asking if there were any more; this from a guy who is about 120 lbs. soaking wet.  Some claim that he stuffed some away for snacks during racing on Sunday.  When confronted with this grotesque ingestion of 436 g of saturated fat, Barbehenn claimed that it was ok since he "skipped dessert".

The weather forecast Sunday morning was a bit less optimistic than Saturday.  However, the local ABC news affiliate arrived, wanting to tape some "hot sailing action" for the evening's 6 pm news.  The footage, which shows some boats slowly drifting back and forth waiting for wind and audio comments such as "Look at that duck going faster than us", was saved by some expert commentary by PRO Don Read (you can view the full video here).  We also get a sneak peak of what goes on in the cockpit of #558, which is mostly a bunch of comments about how there weren't enough hushpuppies for dinner the night before.

After a 1-lap race that featured an unnamed boat going toward the bottom mark at the start, the final race of the day was a two-lapper in a tricky but raceable southwest breeze.  The left looked much better for velocity before the start but boats going there were killed up the first beat as Berchem/Fosmire, Sampson/Gertz, and Wells/Caswell went to the now favored right side and led the pack for much of the first half of the race.  Tom Grace, recovering from an uncharacteristic bad Day 1, didn't bail out from the left and caught a nice puff near the top mark to make up a bunch of ground and join the leaders.  The rest of the race was about sailing to the puffs and connecting the dots.  We all know who does this pretty well, even with 34 lbs. of fried bread in his system.  Barbehenn/Sokol worked their way through the pack and nosed out in front.  Hennon/Wallace made a nice recovery and took advantage of great spinnaker run to move up into contention.  The same wind brought the lead pack up to Barbehenn, whose victory now did not look as promising.  A number of tactical plays near the finish in the chasing pack resulted in a very close finish for places 1-6, with Brent managing to cross ahead with Grace/Pacheco on his heels.

As the results were being tallied, participants enjoyed some fantastic 1/4 lb. hot dogs courtesy of ASC member David Monoson, who trucked in his hot dog cart, complete with colorful umbrella.  As everyone packed it in for the trip home, it was universally agreed that this was the best SCC yet and all are excited for the upcoming racing season.  A special thanks to all of the members and volunteers at ASC that made this event possible. 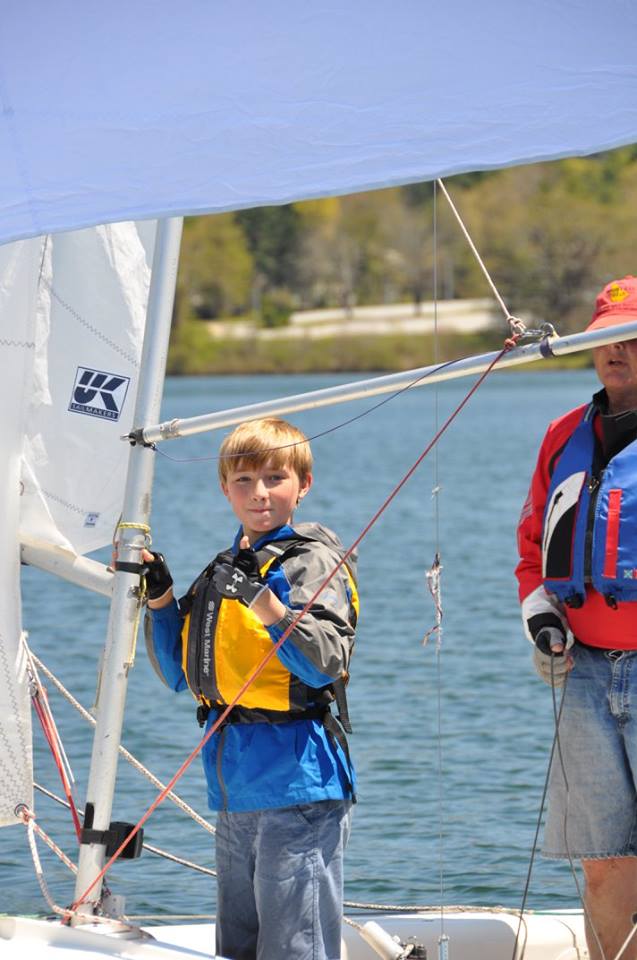